Posted at 11:41h in National Security/UN by The National Center 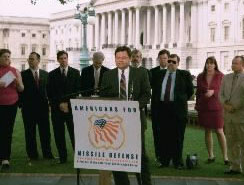 My best friend, David Yuen, was stationed at the Army’s Camp Howze in South Korea. Camp Howze is just miles from the border with North Korea. While serving at this hazardous duty station, he and his colleagues based near the Demilitarized Zone were flippant about the fact that they didn’t stand much of a chance if the North Koreans launched a surprise invasion of South Korea. The soldiers serving at Camp Howze, Camp Red Cloud, the DMZ and other American bases near the border figured the waves of North Koreans would overtake them, and their duty would be simply to slow their advance to Seoul and further down the Korean Peninsula.

I was shocked by David’s nonchalant attitude toward his potential demise. My parents were as well, as were his own family ­ naturally. But many people don’t realize we are now close to the same situation as he was in then.

We’re living in a world in which the North Koreans are just a few years off from developing a missile that could carry a nuclear warhead to the West Coast of the United States. While we were shocked by David’s flippant remarks, the North Koreans may soon cast the same deadly specter over people in San Francisco, Los Angeles and Seattle that they could once only project over South Korea.

People think we are protected against the threat of nuclear annihilation, but we are not. But the means to create such a protection do exist, and I thank the Bush Administration for showing the foresight to push forward with the development and deployment of a national missile defense. We don’t have to live with a sword over our heads like by friend David once did.