ConservativeBlog.org
Posted at 04:43h in Blog by Amy Ridenour

At about the same time as the Senate vote, a new “Stop Spending Now” coalition, whose lead organizers are the American Conservative Union, Heritage Foundation, and the Club for Growth, had a press conference calling upon Congress to cut spending. The Family Research Council and the National Center for Public Policy Research (we joined the coalition late yesterday and lent only moral support today) also are members.

As you can see from the facial expression of Heritage Foundation President Ed Feulner (left), in this photo taken at the Stop Spending Now press conference, these guys are serious. 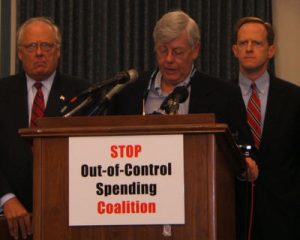 The ACU’s David Keene (at the podium above), citing a Cato Institute study, charged that “discretionary spending increased by 48.4% during Bush’s first term, more than double that of the 21.6% increase during the entire Clinton administration and embarrassingly higher than the 48.3% increase resulting from Lyndon Johnson’s entire discretionary spending spree.”

Ed Feulner essentially said that, unless Congress gets its act together, the U.S. will be worse off than France. The situation is really that bad.

Ed Feulner’s remarks are available online here; the remarks of David Keene can be accessed here. I don’t have access to to the remarks of Pat Toomey of the Club for Growth (the club should email these remarks to Club members – hint, hint), but the Club’s blog does have extensive coverage today on the pork issue.