ConservativeBlog.org
Posted at 06:31h in Blog by Amy Ridenour

If you want to send an email to the main office of the Journey Through Hallowed Ground program, you send it to [email protected]

I thought I’d see who holds the registration for the JTHG.org domain. 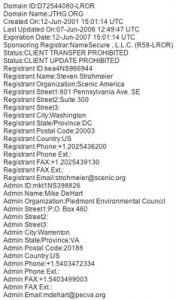 The first fellow is apparently the same Steven Strohmeier who is listed as a press contact on this 2001 press release that calls an Oregon ballot measure approved by voters in 2000 to reimburse property owners when government takes their land or the value of their land away “an unprecedented threat to [Oregon’s] quality of life and scenic beauty.”

The press release bluntly admires Oregon’s stringent land-use restrictions, which, had they been in effect nationally from 1992-2002, would have left 1 million homeowning families, 260,000 of them minority families, priced out of owning their own home.

As the release says : “‘Oregon, through its strong land-use planning laws, has become one of the most beautiful places in America,’ said Scenic America president Meg Maguire. ‘It would be a tragedy to destroy it now.'”

Scenic America is one of the partners of the Journey Through Hallowed Ground Initative, which Senator George Allen and Rep. Frank Wolf want to turn into a National Heritage Area led by a “management entity” funded by federal taxpayers.

Section 3 of the Allen/Wolf legislation limits leadership of the “management entity” to “individuals, agencies, organizations, States, and governments that were involved in the planning and development of the Heritage Area before the date of enactment of this Act.”

Folks like Meg Maguire, Steven Strohmeier and others who really like how they handle these things in Portland.