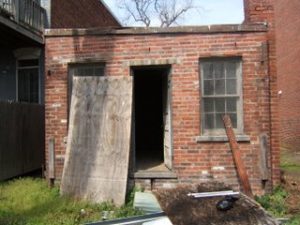 For over two decades, a developer battled Washington, D.C. officials for permission to replace a so-called “historic” run-down shack – which the developer owned – with commercial and residential units for the Capitol Hill neighborhood.

Capitol Hill is home to some of the most valuable real estate in the Washington D.C. metropolitan area. Since the 1970s, however, militant preservationists have prevented the development of a number of very valuable plots under the guise of protecting a form of run-down shack they call a “shotgun house.”

Larry Quillian purchased ten adjacent, mostly-vacant lots on the 1200 block of Pennsylvania Avenue Southeast more than 25 years ago. He planned to remove the remaining structures and construct two-story buildings for retail tenants and residents. Quillian found his dreams for the land destroyed by a 1978 law – passed after he bought the land but before construction had started – that declared the entire Capitol Hill neighborhood a historic district.

Historic district rules dictate that new projects involving demolition of existing buildings must be beneficial to the neighborhood. To meet this requirement, Quillian planned a mixed-use development that would consist of ground-floor retail and second-floor residential units – exactly the type of structures city planning officials have urged developers to build for the last 30 years.

But the Capitol Hill Restoration Society (CHRS) took issue with Quillian’s plan because it necessitated the demolition of a so-called “shotgun house,” a tiny one-story residence so-named because a single shotgun blast through the front door would easily exit through the back window. Insisting that the ramshackle structure was an important piece of the “historic fabric of the community,” the CHRS brought Quillian’s project to the attention of the city’s Historic Preservation Review Board in 1987, which shot down his proposal to build the commercial and residential units.

Quillian then offered to give the shotgun house to the CHRS for free two years later. He proposed a deal in which the CHRS would be able to restore and use the house as it saw fit while Quillian retained control of the lot. CHRS officials rejected Quillian’s offer on the grounds that the deal was bad for the CHRS from an investment standpoint, but they continued to insist that Quillian restore and maintain the shotgun house, doing so with his own money.

Quillian refused to pay the estimated $300,000 that would be needed to preserve the run-down shotgun house. Since he was unable to remove it and develop the property, its condition gradually worsened. Quillian hoped the city would demolish the shack due to sanitation concerns. The Washington, D.C. City Council, however, passed a law in 2001 specifically aimed at preventing “demolition by neglect.” Under the new law, the city is given the ability to use taxpayer dollars to restore and refurbish broken-down properties and then bill the properties’ owners. The Historic Preservation Review Board decided to use Quillian’s property as a test case for the previously unenforced law.

Quillian, who had no intention of paying for the restoration of the shotgun house, did not plan on giving in to the demands of the CHRS or the Review Board. “I don’t really care anymore,” he explained. “I don’t have to develop the site. I can always give it to my grandchildren and let them battle the Restoration Society for the next 30 years.”

Although Quillian had been waiting to see if the District of Columbia would try to restore the shack and bill him for the repairs, it appears this will not be necessary. A Texas development company decided to purchase the house from him. It plans to include the old structure among new apartments it is constructing in the area.