07 Jul 2008 In Making Hurricane Predictions, NOAA Aims for Broadside of a Barn

ConservativeBlog.org
Posted at 04:18h in Articles, Blog by Amy Ridenour

NOAA may have finally figured out a way to get its Atlantic hurricane forecast right. It’s predicting that the 2008 season, which began June 1, will be either normal or above normal.

Covering two out of three possible outcomes ought to improve NOAA’s odds quite a bit.

The difference in the way NOAA is making its prediction this year appears especially stark when you compare NOAA’s 2007 and 2008 graphs. In its 2007 hurricane-prediction graph, NOAA represented normal, above normal and below normal by different colors. 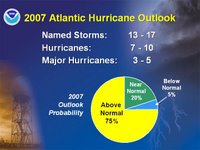 The 2008 hurricane-prediction graph has just two colors — green for both near-normal and above-normal and light blue for below normal. 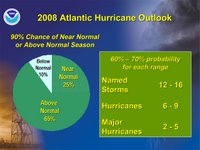 Here’s how NOAA explains it in its press release:

Funny, NOAA personnel didn’t do it that way last year:

Experts at the NOAA Climate Prediction Center are projecting a 75 percent chance that the Atlantic Hurricane Season will be above normal this year—showing the ongoing active hurricane era remains strong.

At the time they were forecasting a 20% chance of near normal storm activity, which would mean a 95% chance of normal or above-normal activity. Guess the 5% swing really made a difference.

The forecasts failed even as NOAA was increasing the margin for error.

Perhaps there’s a legitimate reason why the ACE forecast range keeps growing, but it sure looks similar to someone shooting at a target, missing, then moving closer to target to make it a bigger target. You miss enough times and get close enough that eventually you can’t miss.

NOAA won’t need to clear a very high bar to be right with this year’s hurricane season. It need only name 11 storms — which ought to be a cinch with the newly-updated satellite equipment at its disposal. Eleven is an average number of named storms that NOAA says occur each year, but the number of named storms has risen not only due to better detection due to advances in technology, but due to changes in the type of storms that are named. Subtropical storms, for example, weren’t named until 2002.

Here’s hoping Mother Nature has a sense of humor.

David Ridenour is vice president of the National Center for Public Policy Research. To contact David directly, write him at [email protected].