Posted at 09:18h in National Security/UN by The National Center

President Obama seems concerned with endearing himself to the people of all countries except his own. Most recently, we’ve seen him pandering to the people of Brazil. The truth is that we don’t need Brazil’s oil, and we should be drilling at home, creating jobs in the process. Since the President seems so intent on pandering to the Brazilians, Steven Crowder suggests that he consider running for the President of Brazil instead. Many celebrities agree (as you’ll see in the video)… so you know he’s right. 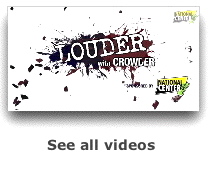