07 Jan 2011 Note to Ignorant, Pro-Slavery Left: Congress is Not a History Class

ConservativeBlog.org
Posted at 09:39h in Articles, Blog by Amy Ridenour 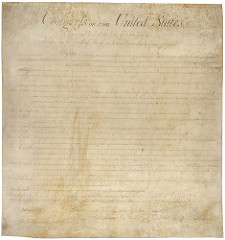 In a New Visions essay Project 21 published today, Bob Parks points out that the “three-fifths” clause in the Constitution was about OPPOSING the power of the southern states to protect and expand slavery.

Many leftists complaining about the current Constitution being read aloud in the House apparently are unaware that the clause is evidence of efforts to eradicate slavery. They are embarrassed by it.

But their ignorance is beside the point. Congress is not a history class. The point was to remind Members that they genuinely are governed by this governing document.

The Constitution’s versions of 1787, 1887 or even 1987 do not now govern this nation. Congress must ignore those. Members swear an oath to follow the Constitution in effect when they serve, so the only proper version to read to them as a reminder of their duties is the Constitution that is in effect.

The real scandal here is not the ludicrous notion that the House leadership is trying to hide the historical fact of slavery (to what end? It was their political party that was formed to eradicate it), but that Members of Congress need the Constitution read to them at all. But as Nancy Pelosi proved with her infamous “Are you serious?” question, many Members think the Constitution is just an advice manual, and that they can do whatever they want. It’s this sort of petty dictatorship thinking the House leadership has set out to eradicate, and rightfully so.

Because, you know, if Congress stops honoring the Constitution, and governs us without adhering to it, in a very real sense, we’ll all be living in a form of slavery.

New Visions Commentaries like Bob’s, by the way, are available free-of-charge for reprint, so if any of you journalists or bloggers out there like what Bob had to say, you are welcome to reprint his essay or any other New Visions Commentary, just as long as you credit the source.