ConservativeBlog.org
Posted at 09:36h in Articles, Blog by Amy Ridenour

…for the shooting of Rep. Gabrielle Giffords and as yet unnamed others in Tucson.

The Atlantic’s Andrew Sullivan didn’t wait for facts to write: “The conflation of conservatism with the willingness to use violence depressingly deepens.”

His evidence? Rep. Giffords’ opponent in the last election, a former combat Marine, ran an ad featuring a picture of himself holding a firearm with the title “Does This Look Like a Rino [Republican in Name Only]?”

As Rep. Giffords is not a Republican, and Marines carry firearms lawfully and for good reason, I’m being generous to Sullivan to even call this a stretch.

Sullivan also observed that at a prior public appearance by Rep. Gifford, a gun accidentally fell out of a holster worn by a senior citizen in the crowd. Rep. Giffords herself apparently did not find that incident threatening, and neither should Sullivan.

The relevant parts of Sullivan’s post are reproduced below. The post itself has changed substantially since I first noticed it. 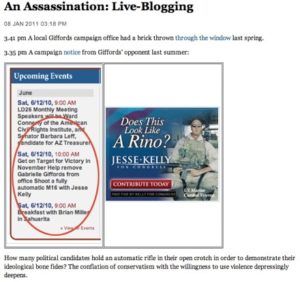 P.S. Curiously, Andrew Sullivan said nothing about this. Maybe the Daily Kos audience isn’t big enough to draw his notice?