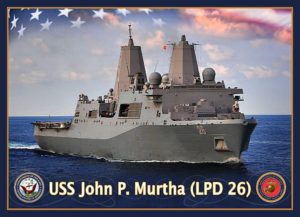 In the November 2010 issue of Proceedings, the magazine of the U.S. Naval Institute, senior editor J.M. Caiella wrote about the problem in naming one of the Navy’s newest amphibious transports after the late Representative John Murtha (D-PA).

Caiella focused on both how naming a ship after a politician breaks this normal ship-naming conventions and can cause potential partisan acrimony.  He also noted that it robs the Navy of the ability to properly promote the nation and itself at home and abroad.  Caiella wrote:

To aggregate the nation around its cause, the Navy should use names that are apolitical and historical.  Political names immediately alienate a large segment of the population, often with passion that does not fade with time.  Can the Navy afford this?

With the proper name, the service could keep nearly all of the population on its side.  What Democrat, Republican, Independent, Tea Partier or non-voter would dare find fault with America, Independence, Freedom, Liberty, United States or Constitution?

Thompson focused on the politics, and how many see naming a ship meant to transport and supply Marines in combat should not be named after a politician with a questionable (Abscam, PMA Group) ethics history and — most importantly — incorrectlycharged that Marines fighting in Haditha, Iraq in 2006 “killed innocent civilians in cold blood.”

Interesting.  But old news.  The National Center’s Justin Danhof wrote about this back in July 2010.

Back in July, Justin wrote about all of the things Proceedings and Time are just starting to talk about now.

Justin’s commentary was published in newspapers across the country, including the Sacramento bee, Biloxi Sun-Herald, Bellingham Herald, Lexington Herald Leader and Press of Atlantic City.  In the commentary, Justin wrote:

On April 23, Secretary of the Navy Ray Mabus announced that the newest San Antonio-class LPD ship would be named the U.S.S. John P. Murtha.  This is great news for American apologists and pork-barrel fans, but for American patriots — and especially the Marines — it’s a travesty.

Was the name U.S.S. Abscam taken?  San Antonio-class ships, per the Navy’s ship-naming system, are generally named after American cities.  Murtha, who retired as a colonel in 1990, was a 37-year veteran of the Marine Corps and Marine Forces Reserve.  He will be the first — and likely only — person to have to have an LPD named in his honor. This exception is unnecessary…

At Murtha’s ship-naming ceremony, Speaker Nancy Pelosi (D-CA) said that he “cared for (the young Marines) as a father.  They knew it and they returned his respect.”  The irony of “cold-blooded killers” serving aboard a ship named for Murtha may be lost on Pelosi, but others are furious…

Perhaps Secretary Mabus overlooked the Haditha comments to honor Murtha’s tenure as chairman of the House Appropriations Subcommittee on Defense.  But, contrasted with politicians like Carl Vinson and John C. Stennis who have Navy ships named for them, Murtha is known more for pork-barrel spending than revolutionizing the Navy.

Then there are the ethical problems…

From the Abscam scandal, where he was caught on camera appearing to negotiate a bribe with imposter Arab sheiks, to the PMA group — one of his largest donors — currently under investigation for violating campaign finance laws, Murtha was never beyond reproach.

Here’s hoping that the Navy corrects course and scuttles the U.S.S. Murtha.