Has that prediction already come true?

Tim Carney of the Washington Examiner believes it may be so. According to Carney’s reporting, just a week after Immelt’s appointment, the Environmental Protection Agency granted an exemption (its first ever) from greenhouse gas emission rules to a California power plant that is now expected to purchase several expensive GE-made turbines.

Coincidence? Possibly, although no one gets exemptions from EPA permits without come kind of connection. Here’s what Carney concludes:

Maybe GE CEO Jeff Immelt’s closeness to President Obama, and his broad support for Obama’s agenda, had nothing to do with this exemption. But we have no way of knowing that, and given the administration’s record of regularly misleading Americans regarding lobbyists, frankly, I wouldn’t trust the White House if they told me there was no connection.

GE does spend a fortune on lobbyists, and its CEO is the biggest de facto lobbyist of them all. Check out the seating chart for the last White House state dinner, on January 19 for China’s Communist Party boss, “President” Hu Jintao: 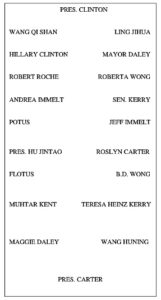 P.S. If you haven’t already seen it, check out our new commercial, produced jointly with FreedomWorks, on GE, and consider signing our petition at bigbusinesswatch.org.