ConservativeBlog.org
Posted at 04:43h in Blog by David Almasi 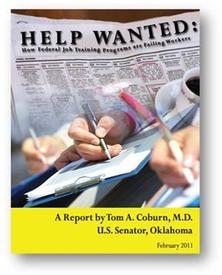 February 12 came and went without a reauthorization of the current federal Trade Adjustment Assistance program.

Even as ABC News portrayed the current status of TAA as Congress telling unemployed Americans “tough luck,” Howard Rosen of the Trade Adjustment Assistance Coalition explained later in that same ABC report that the program simply reverts to its pre-stimulus form.  That was before TAA’s scope was expanded to three times as many beneficiaries from an increased pool of unemployed.  Rosen said that everyone who’s been promised something will get it, and new applicants will once again be restricted to the manufacturing sector.

And, of course, there is always the possibility the enhanced program will be resurrected as part of a political deal.  Before its expiration, there was talk of such a deal involving one or more foreign trade agreements.

The nagging question yet to be answered, however, is whether TAA will be missed if it really goes away altogether.

A 2008 report conducted at the American University found TAA to be a “dubious value,” which seems to be par for the course with so many other federal job training programs.

Senator Tom Coburn, M.D. just released his own oversight report that highlights examples of waste, fraud and abuse in federal job training programs.  Last month, and partially reprinted in Coburn’s report, the GAO released its own analysis of 47 different federal jobs programs administered by nine different federal bureaucracies in 2009 at the cost of $18 billion.  Of those 47 programs, the GAO found 44 to be duplicative and that “little is known about the effectiveness of most programs.”

Let’s go over that again: $18 billion was spent in one year with “little” known about whether or not it was spent effectively!

According to Dr. Coburn:

Too often, job training programs have been designed to help politicians keep their jobs rather than helping the unemployed find jobs.  We create new programs with great fanfare then never bother to measure their effectiveness.  We simply cannot keep doing things as they have always been done.  Unemployed Americans don’t need just need our good intentions.  They need us to conduct careful oversight and ask hard questions of programs designed to help people in very difficult transitions.

Dr. Coburn’s report of specific abuses, paired with the broader GAO analysis, shows that there is more to consider than the tugging-at-the-heartstrings arguments, including those reported by the media regarding TAA.

As our national deficit climbs ever higher, it’s necessary for government to make tough decisions on spending.  Or maybe it’s not so tough when reports such as these point the way to more fiscally responsible options.