ConservativeBlog.org
Posted at 14:47h in Articles, Blog by Amy Ridenour 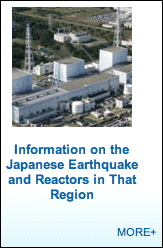 Most big American businesses have one of two positions on policy issues: “left-wing” or “surrender.”

Even by that pathetic standard, the communications shops of businesses directly involved in the nuclear power industry, either as plant operators, major equipment suppliers or trade associations, are rapidly earning a failing grade for their handling of the nuclear power crisis in Japan.

The nuclear crisis already seems likely to surpass Three Mile Island in harm to the industry, and that’s saying something.

Do nuclear power-related companies even care?

The cable TV news business knows nothing about nuclear power — Charlie Sheen is more their speed — and relies on industry to tell them what’s what on issues like this. Based on what I’ve seen, the print and electronic media aren’t much better.

I realize the vice president for communications at nuclear power company X can’t just book himself or herself on CNN, Fox or that cable channel so recently owned by nuclear power equipment-manufacturer General Electric, but they could be sending out email alerts and press releases. Maybe a fact sheet on their website?

The greens sure do. I have received many unsolicited emails from anti-nuclear environmental groups on the Japanese reactor situation, despite running a group that the greens don’t like and doesn’t expect to be sympathetic, to put it mildly.

The grand total of emails I’ve received on the Japan crisis from businesses related in some form to the nuclear power industry — businesses presumably with both professional communications shops and large numbers of nuclear engineers and scientists? Zero. Nada.

I hoped it was just a case of me being out of the loop, so I did a survey of the webpages of major players in the nuclear business to see what resources are being made available to help the nuclear debate on the current crisis be accurate:

Trade associations — of all those I could think of with members in the nuclear business, only the website of the Nuclear Energy Institute (the nuclear industry’s trade association) contained reasonably-obvious informational resources on the Japanese crisis. The NEI website failed to load on several occasions, in fact, so I can only assume it is overloaded. NEI’s Twitter feed is active. So that’s ONE.

General Electric (reportedly America’s largest nuclear-reactor builder and a designer of at least one of the affected Japanese reactors): Website has nothing on the crisis. Latest news release: “Take a Ride on GE’s Solar-Powered Carousel at SXSW.” Unbelievable.

NRG Energy: Nothing. Latest news release: “Texas Cowboy Hall of Fame and Green Mountain Energy Company ‘Flip Switch’ for Museum’s New Solar Array – and First for Stockyards.” (Reminds me of something only Harry Reid would care about.)

Southern Company: Nothing. Latest news release: “Southern Company Tops Fortune’s ‘Most Admired’ List.” (Will it still be after the greens decimate your core business?)

Westinghouse Electric: Nothing. Latest release: “Westinghouse, Endesa Sign Agreement on AP1000® Technology.” This one kills me for personal reasons (my Dad spent his career at Westinghouse Electric), but at least Westinghouse executives aren’t riding merry-go-rounds like the brass at GE. (If readers will indulge an additional personal note, Westinghouse’s Waltz Mill, PA nuclear facility is located on land once owned by my g-g-g-g-g-grandparents, Susannah and Nehemiah Stokely. Jacob Waltz was a newcomer.)

PG&E: Nothing. Latest release: “PG&E Statement at Conclusion of NTSB Hearings.” (Expect more hearings in your future, guys. The Hill reports today that “some U.S. lawmakers are looking to ‘put the brakes’ on building new nuclear power plants” in light of what is happening in Japan.)

There are other companies, but the trend is clear. Other than the Nuclear Energy Institute, I haven’t found one yet that appears to be doing anything to tell the nuclear industry’s story at the time of its greatest crisis since at least 1979.

As our anti-energy President would say, let me be clear. I am not calling upon the nuclear industry to spin. I’m asking it to inform. There’s a huge information gap out there that mostly is being filled by speculation and anti-nuclear environmental organizations. Most major nuclear-related businesses appear to be AWOL from a debate that literally could result in the end of their industry.

Too bad more than just their profits are at stake.