According to this AP article, the U.S., through U.S. Nuclear Regulatory Commission Chairman Gregory Jaczko, is saying that conditions are worse at Unit 4 of the Fukushima Dai-ichi complex than the people on the ground, the Japanese Government and the Tokyo Electric Power Company.

Jaczko is a former Congressional staffer who worked these issues for Rep. Ed Markey — the very Rep. Markey who has been a fervent opponent of nuclear power and who just called for a moratorium on new plants. The AP doesn’t seem to have thought that was relevant.

The AP also seems to have confused a member of the U.S. Nuclear Regulatory Commission, Chairman though he may be, with representing the opinion of the United States of America (look at the headline).

Editor’s note: When this blog post was published, the AP headline read, “U.S. says plant’s spent fuel rods dry; Japan says no.” The headline has since been changed to: “Nuclear crisis a tangle of ominous, hopeful signs.” See secreen snap, below, for original version: 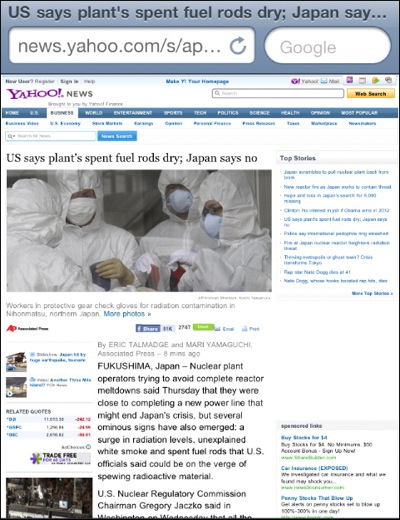