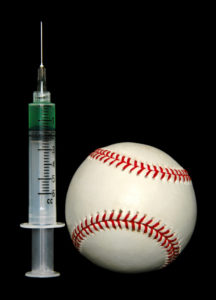 Baseball and steroids isolated over a black background.

On this day, 64 years ago, Jackie Robinson heroically broke baseball’s color barrier, becoming the first black player in Major League Baseball.  Today, baseball rosters are filled with players of varied backgrounds and ethnicities.  Now, all players are judged on performance, statistics and effort – not by the color of their skin.  Unfortunately, some liberal commentators still see America’s pastime, indeed they see America, as deeply racist.

On Wednesday, Barry Bonds, the unrepentant slugger who hit the most home runs* of all time, left a San Francisco courtroom as a felon.   A jury of his peers said Bonds was guilty of obstruction of justice – a federal offense.  The jury was deadlocked on three other charges.

Because he is black, it did not take long for some in the media to make false cries of racism.  In fact, one newspaper started race baiting before the jury reached its verdict.  If you guessed the extremely partisan New York Times, you are correct.

Reading the New York Times, one expects liberal race baiting from the blowhards that pontificate on its editorial page, however, back on April 9th, Times sports columnist William C. Rhoden crawled out of his ivory tower to share his ugly vision of America.  Rhoden, who sees every story in black and white, claimed that Bonds was being prosecuted for being a successful black man.

Contemplate that for a moment.

In 2011, Rhoden believes that the United States federal government prosecutes individuals for being successful and black.  Presumably, Rhoden believes that the Department of Justice will soon file a lawsuit against President Barack Obama because he is black and successful.  Or maybe Rhoden, who is himself an accomplished black man, is paranoid the feds will come looking for him.

According to Rhoden’s divisive and false rhetoric,

The trial of Barry Bonds has always been more than a simple case of pursuing a bad guy and proving that he lied. The chase and the subsequent trial have been as much about a baseball era driven by vanity and greed, and fueled by performance-enhancing drugs.

Rhoden’s type is the very worst of the American fabric.  Instead of using his elite position to bring individuals together with a sense of shared community, he tries to rip this nation apart at the seams.

Rhoden, recognizing his claim may be hard to believe, admitted,

That might seem like an incredible statement to make in a nation that elected Barack Obama as its first black president. But Obama, who has had his citizenship questioned and has been heckled by a member of Congress, has a place among men including Jack Johnson, Paul Robeson, Muhammad Ali and Bonds.

Rhoden uses the same false narrative and reasoning that has dominated media coverage of the tea party movement.  Since tea party participants criticize President Obama’s policies, and Obama is black, the tea party is racist they claim.  Liberals really need to take a course in logic.

Bonds was prosecuted because government officials believed that he lied under oath.  Obama’s policies are criticized because tea partiers believe in small government and individual responsibility.

By making this false accusation, Rhoden diminishes real instances of racism.  And for that, he should apologize.

Additionally, Bonds is just one of many players that have endured scrutiny for allegedly lying about steroid use.  Writing in the New York Daily News, award-winning author Mike Lupica takes issue with those injecting race into the Bonds saga.  Lupica writes,

People still want to make the case against Barry Bonds about race, some sort of bias against Bonds because he’s the one who holds the all-time record of 762 home runs – 762 with a bullet now – as if Bonds had somehow broken Babe Ruth’s record instead of the great Henry Aaron’s. That part of the conversation has always been nothing more than silly background noise.

And if this all happened to Bonds because he is a proud and defiant African-American record-breaking athlete, if that is what made the government go after him, then somebody has to explain to me why the feds are after Roger Clemens now. Why Clemens is the next one on his way into a court of law, why Clemens is the baseball immortal next facing a perjury rap. Clemens’ denials about baseball drugs didn’t come in a closed grand jury room, they came in front of Congress and in front of the whole world.

You see, Roger Clemens is white.  So how does Rhoden justify his unsubstantiated thesis?

He totally sidesteps the issue, writing,

People will argue that the perjury trial of Roger Clemens scheduled for July is evidence that Bonds was not being singled out because he was a black star. That’s a topic for another day, but the cases are different.

Don’t let the facts get in the way of your opinion, Mr. Rhoden.

On Jackie Robinson’s anniversary, fans and players should celebrate.  The best way to do that is to treat everyone as an individual.  Baseball fans should, and will, cheer or boo players on the content of their athletic pursuits, not based on the color of their skin.  And whatever you do on this historic anniversary, do not fall for the racial narrative of the New York Times.

The New York Times – all the news that fit to race bait.