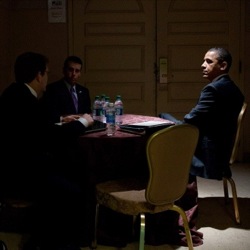 President Obama, who once said of those who disagree with his views, “I will be your president, too,” publicly used the slur “climate change denier” at a political fundraiser in San Francisco Wednesday.

The “climate change denier” term is meant to equate people unconvinced that humans significantly affect climate with malevolent Holocaust deniers. It is well-known as a propaganda tool intended to establish skepticism about the global warming theory as a moral fault (which should always be opposed) rather than a difference of opinion (which encourages further inquiry).

The use of “climate change denier” has been hotly criticized for years. Anyone who more than superficially follows the global warming issue would be aware that the term is a slur, so it is very likely the President used it intentionally.

The President’s much-criticized comments about bitter Pennsylvanians who “cling to guns or religion” almost exactly three years ago also were made at a San Francisco political fundraiser. The President appears to speak a bit freely at these events.

President Obama once famously said, “there’s not a liberal America and a conservative America – there’s the United States of America,” but when it comes to global warming, he apparently believes there is a moral America and an immoral America, and he’s qualified to say which is which.