Somehow we have to figure out how to boost the price of gasoline to the levels in Europe.

That’s what Energy Secretary Steven Chu told the Wall Street Journal in September 2008, just before Obama was elected. At the time, the price of gas in Europe was $8 a gallon.

With gas prices today at $3.87 for the national average—and more than $4 a gallon in many regions of the country—looks like it won’t be long before President Obama and his advisors get their wish.

Nor is it surprising, given the Obama Administration’s agenda to slow domestic oil production down to a crawl that gas prices have been on the rise, as this graph shows: 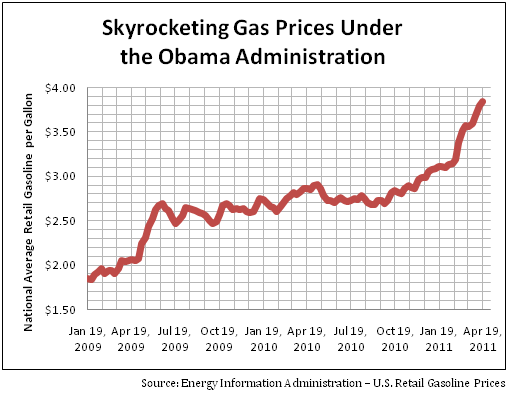 The implications of near-record high gas prices on our economy are enormous. New numbers on economic growth released by the Commerce Department yesterday show the economy slowed sharply the first quarter due in large part to soaring gas prices.