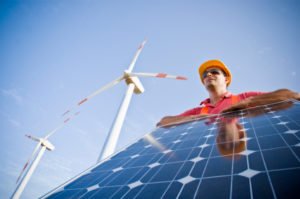 Image of a worker in between new industries to produce energy. In the background you can see Wind Turbines. Two different technologies to produce energy in a responsible and sustainable way (ISO 100) . All my images have been processed in 16 Bits and transfer down to 8 before uploading. [url=http://www.istockphoto.com/file_search.php?action=file&lightboxID=7053550] [img]http://www.ll28.com/istock/solarpanel.jpg [/img][/url]

An Associated Press article about the announcement notes that Google has invested more than $680 million in alternative energy projects.  The AP reports that not everyone is impressed:

Investors have raised questions about investments that have little to do with Google’s main Internet businesses and that may be potentially risky.

This echoes what I wrote in a Pajamas Media article published this morning:

Since its inception and initial public offering, Google has created immense shareholder value by focusing on its core Internet, technology, and advertising businesses. However, in recent years Google has spent millions in alternative energy markets. Google’s foray into alternative energy is suspicious for multiple reasons and begs for an explanation.

The article discusses Google’s lack of transparency regarding its green energy investments.  I continue:

Perhaps the most curious aspect of Google’s green energy investments is that they align more closely with Google board member John Doerr’s personal holdings than with the company’s core business.

Doerr is fanatical about alternative energy, and has spent much of his career advocating for liberal climate change policies. In California, Doerr has been a leader in the cap-and-trade movement. At the federal level, Doerr serves on President Obama’s Economic Recovery and Advisory Board, where he is in a position to influence energy policy. A venture capitalist by trade, Doerr is a partner at Kleiner Perkins Caufield & Byers, a venture capital firm that is heavily invested in alternative energy.

Google and Doerr have even invested in the same small geothermal company raising a potential conflict of interest.

At Google’s annual shareholder meeting on June 2nd, I represented the National Center and presented a shareholder proposal asking the company to disclose these apparent conflicts to the company’s shareholders.

(To read more about my efforts at the Google shareholder meeting, see here, and here.)

In my Pajamas Media article, I explain:

Without transparency, shareholders are left to believe either that Doerr is pulling the strings on Google’s alternative energy investments — potentially for his own benefit — or the company is bailing out one of its own. Either scenario is likely a losing proposition for Google investors.

Google’s leadership rejected this call for transparency.  However, the shareholders in attendance were vocal in supporting the National Center’s proposal.

If Google continues to invest large sums of shareholder money in speculative alternative energy markets, expect the calls for transparency to get louder.