ConservativeBlog.org
Posted at 16:47h in Articles, Blog by Amy Ridenour

“Snippy or not snippy?” is not the question we need to be debating right now.

That question is: Will our elected officials continue to steadily increase the amount of money spent by the government as a percentage of GDP while financing this with loans, including from rivals?

As getting the answer to this question right is keenly important, and the American people are the ultimate arbiter of how this matter should be handled (and whether they are happy with however the question ends up being answered), why on earth aren’t these talks on C-SPAN?

Regarding health care, a very significant but not more significant issue, the President once said it was important to “not [be]negotiating behind closed doors, but bringing all parties together, and broadcasting those negotiations on C-SPAN so the American people can see what the choices are…”

Scratch that, he said the rough equivalent more than once:

He echoed the theme after the inauguration. Here’s part of a document he issued as President (read the whole thing on the White House website here): 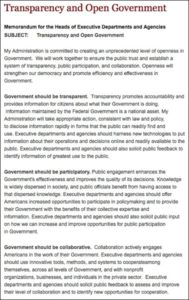 Who would like to see the debt ceiling discussions broadcast on C-SPAN? And since C-SPAN almost certainly has been willing to broadcast them all along, who is it that has been keeping C-SPAN out?