ConservativeBlog.org
Posted at 12:59h in Articles, Blog by David Ridenour

Our friend, Lumpy, has agreed to finally do something about his spiraling, out-of control weight. He’s planning significant cuts to his weight gain baseline… but not to his waistline.

Lumpy’s weight normally increases at the rate of about 10% per year, so he’s decided to scale it back to half that. If he fails to make the necessary caloric intake “cuts” to meet his goal, he and a committee of some of the more portly members of his weight watchers club will discuss what to do about it over dinner and dessert… and dessert… and dessert.

Even assuming he has the willpower to keep with his calorie austerity program, Lumpy’s weight will still increase 160 pounds over ten years. Nonetheless, Lumpy claims he will lose 234 pounds on his new diet. 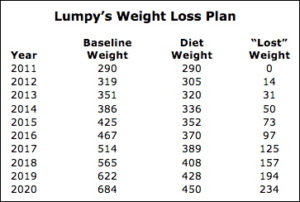 Lumpy responds angrily, “Regardless of what some doctors say, I will always consider myself to be of normal weight. In the right light, you could even say I’m ‘svelte.'”

As on Capitol Hill, the “right light” must be in the dark.