Posted at 09:38h in Articles by The National Center

If Rep. Joe Walsh “won election to the Senate by 291 votes,” why is he in the House of Representatives? 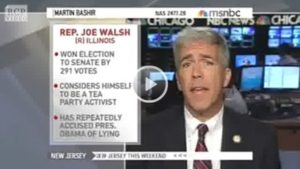 In the video from which this is taken, Rep. Walsh does a great job eviscerating MSNBC’s Martin Bashir’s moronic and insulting questions (e.g., at 8:10 in the video, asking Walsh if he’s not planning to attend President Obama’s upcoming speech because the President “is black”). Walsh remains calm and projects likability, even when Bashir interrupts him to ask questions he’s already answered.