ConservativeBlog.org
Posted at 16:48h in Articles, Blog by David Almasi 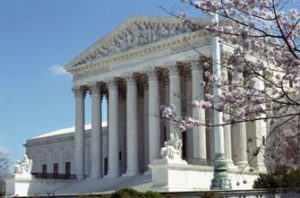 Project 21, the National Center’s black leadership network, joined a legal brief that was recently filed with the U.S. Supreme Court.  The brief urges the justices to take up the appeal of Fisher v. Texas.

What’s to be decided in this latest challenge to race-based preferences is something very fundamental — should an applicant to a college or university be rewarded or penalized simply because of the color of their skin.  The U.S. Supreme Court skirted this essential issue in 2003 when it faced the issue of racial preferences in Grutter v. Bollinger and Gratz v. Bollinger.  Now, in Fisher v. University of Texas, while not frontally challenging the Court’s 2003 ruling, what’s being asked is that race neutral standards be applied before any pandering to ‘diversity’ occurs.  What’s factually clear is that had Abigail Fisher been black or Hispanic she would have been eagerly accepted to the University of Texas.  Instead, she was rejected.  No matter how you parse it, this amounts to discrimination.

Project 21 joined an amicus curiae (“friend of the court”) brief submitted to the U.S. Supreme Court in the case of Abigail Noel Fisher v. University of Texas at Austin.  The brief was written by the Pacific Legal Foundation and, in addition to Project 21, has been joined by the Center for Equal Opportunity, American Civil Rights Foundation and National Association of Scholars.

Race-based admissions were outlawed in Texas in 1996 by the 5th Circuit Court of Appeals Hopwood decision.  Afterward, in 1997, Texas legislators passed legislation signed by then-Governor George W. Bush that granted automatic public college and university admission to high school students in the top ten percent of their graduating classes.  This law is credited with increasing black and Hispanic enrollment above pre-Hopwood levels.  On June 23, 2003, however, the day the U.S. Supreme Court cited a “compelling state interest” for certain classroom diversity standards in its ruling in Grutter v. Bollinger, UT officials announced they would re-introduce racial considerations into the application process.

Plaintiff Abigail Fisher, who is white, claims preferences caused her to be rejected in favor of lesser-qualified candidates who are racial minorities.  Her appeal to the U.S. Supreme Court seeks to determine if UT’s race-based admissions policy presents a “compelling, otherwise unsatisfied, government interest and narrow tailoring to advance their interest” as it pertains to the equal protection guarantee of the 14th Amendment to the U.S. Constitution.

As the brief Project 21 joined states: “Review is crucial to restore meaningful limits on government’s authority to discriminate based on race.

The brief can be downloaded by clicking here.