ConservativeBlog.org
Posted at 16:27h in Articles, Blog by David Almasi 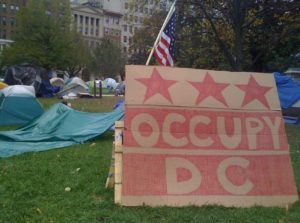 It’s more tent that tarp.  In fact, the place looks like a Boy Scout Jamboree.  There are a few homemade structures made of blue tarp, but most of the tarps are on the ground, providing flooring for tents that look surprisingly new.   And, with the elbow room they are giving each other, they have now taken over about 75 percent of the park’s open space. 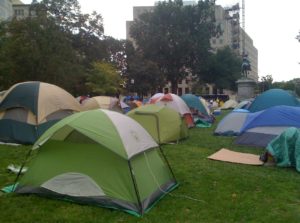 Those tarps, by the way, are estimated to be doing $212,000 in damage to the park’s grass — which was recently replaced with money provided by Obama’s 2009 stimulus bill. 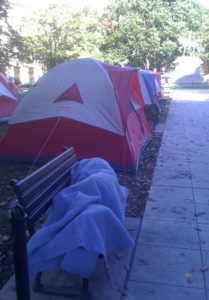 That’s a real homeless guy in the foreground, followed by the neatly-spaced new-looking tents of the occupiers.  All they seem to be missing is mailboxes. 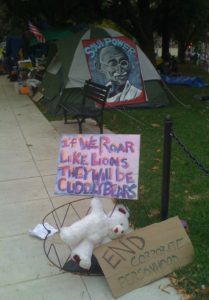 While these hippies are living on “soul power”… 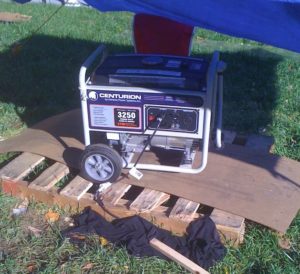 Rest assured that they are just a few feet away from the old-fashioned gas power.  This generator, fueled by fossil fuels rather than the sun or wind, lists for over $400 at Lowe’s.  The Post article notes that the occupiers have a gas card that they use to keep the power flowing. 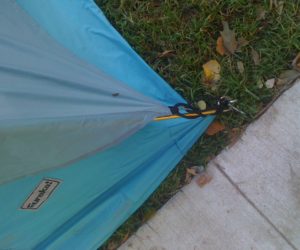 A lot of the tents, as mentioned, look brand-new and are quite expensive (note how the tie-downs on this $189 model look like they haven’t been used before). 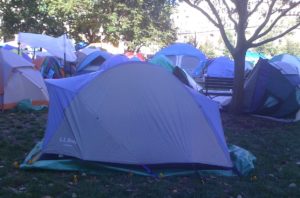