ConservativeBlog.org
Posted at 13:15h in Articles, Blog by David Almasi 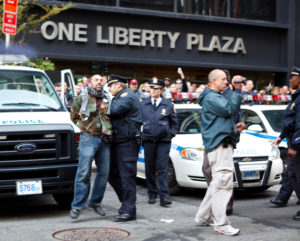 New York, New York, USA – November 3, 2011: People look on from behind police barricades as NYPD police deal with a man just outside of Zuccotti Park in lower Manhattan. Zuccotti Park is the hub of the Occupy Wall Street movement in Manhattan.
Note to inspector: Focus is on the man being “arrested”. He is jumping and the police officer is also moving. Proper focus can be seen on the mands shirt on his left arm. Because of the violent movements of the two men, there is some motion blur.
[url=/my_lightbox_contents.php?lightboxID=3623142]Click here for more[/url] New York images and video.

Consider it the Maxine Waters “it happens” moment.

Representative Waters (D-CA) went on MSNBC’s “Morning Joe” on March 31, 2010 to decry the “outlandish behavior” of the Tea Party movement.  At that time, the allegedly horrified Waters said the “shouting,” “name-calling” and never-proven “spitting,” “[spoke] volumes” about Tea Party radicalism.

But then she got a little less afraid and a little more radical herself over time.  On August 20, 2011, having had enough of the Tea Party’s behavior and obviously annoyed its new political might in the Capitol Building she claimed they had infiltrated in March of 2010, Waters told a crowd in Inglewood, California that “as far as I am concerned, the Tea Party can go straight to Hell.”

Now that the left is occupying Wall Street, Oakland, Portland and other American cities — and not been good or peaceful neighbors — the shoe is on the other foot.  John Nolte has a compilation of articles (348 so far) on the BigGovernment.com web site chronicling Occupy-related arrests made, invectives thrown, spittle spat, hacking of government computers, fighting, sexual assaults and even deaths.

But Waters is suddenly whistling a different tune.

Let me just say this: Anytime you have a gathering, homeless people are going to show up.  They will find some comfort in having some other people out on the streets with them.  They’re looking for food.  Oftentimes, the criminal element will invade.  That’s life and it happens, whether it’s with protesters or other efforts that go on in this country.  So I’m not deterred in my support for them because of these negative kinds of things.

She did everything but blame Bush!

What a difference a political agenda makes.  “That’s life and it happens.”  “I’m not deterred in my support for them.”  But the shouting on the part of the Tea Party — the least of the offenses reported regarding the Occupy mobs — was “outlandish” to her a mere 20 months ago.

Or does she have that low of an opinion of the homeless? 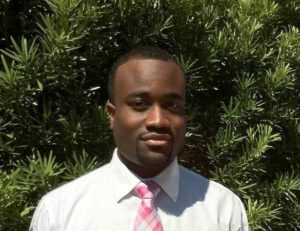 In August, a feral Maxine Waters wished the Tea Party “straight to Hell.”  Last week, she essentially said that reports of crimes, sex and drug use at various Occupy Wall Street protests are just “life.”
In recent weeks, Occupy Wall Street was effectively embraced by President Obama.  Their crusade for alleged fairness is lionized by liberal Hollywood elites.  College professors now reportedly inculcate the Occupy message for extra credit.  The national press broadcast their Occupy Wall Street sympathies from nearly every media organ.  Jessie Jackson lauded Occupy efforts to the extent of proclaiming them a functional extension of the civil rights movement.

From Florida to California, however, Occupy protesters spew anti-Semitism and incivility while feeding their lust for outlawry.  They are public vestiges of a culture turned on its head.  I see these Marxist antagonists as an outgrowth of the spoiled kids of Woodstock parents.  In the process, the old leftist rallying cry of “make love not war” seems to have taken its place behind the demand of “I want a free iPhone!”

While Occupy Wall Street is lawless, the Tea Party has been flawless.