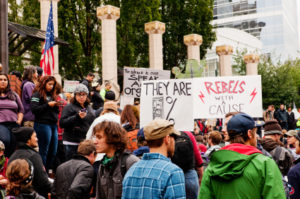 Remember when then-Speaker of the House Nancy Pelosi (D-CA) claimed that the Tea Party was an “astro-turf” movement?  Well it isn’t, but Occupy Wall Street sure is.

From its genesis, the Occupiers were spurned by a George Soros affiliated group, and supported by leading labor unions.  Claiming to be the “99 percent” suffering from income inequality, the Occupy movement has devolved into a violent mass of rape, drug use and infestation.  A modern-day Sodom and Gomorrah, Occupy Wall Street is a disgrace.  In a little more than two months, the Occupy Wall Street movement has produced 372 documented incidents of violence, rape, arrests and death.

The time has come for its supporters to be held accountable and to apologize to the American people.

One of the Obamaville campsites’ most prominent supporters is the Service Employees International Union (SEIU).  The SEIU is a 2 million-member labor union that donates generously to Democratic candidates and flocks to protests in easily recognizable purple t-shirts.  (To learn more about the SEIU, visit GroupSnoop.org and view their profile.)

In spite of the rampant drug use, deaths and rapes, the SEIU fully supports the Occupy Wall Street crowd.  On October 5, the SEIU issued a union-wide endorsement of the Occupiers, saying:

The brave students, workers, and unemployed Americans occupying Wall Street have shaken the conscience of our nation.  The crowds and demonstrations will only get larger and louder as more Americans find the courage inside themselves to stand up and demand Wall Street CEOs and millionaires pay their fair share to create good jobs now … Wall Street CEOs not only crashed our economy and demanded billions in taxpayer-bailouts—they destroyed the jobs and livelihoods and took the homes of millions of Americans.  It’s time to force Wall Street to pay for the jobs our country desperately needs.

Then on October 8, SEUI President Mary Kay Henry penned an op-ed in the Wall Street Journal encouraging the Occupiers, writing:

We can begin to right the wrongs of our economy and respond to the growing demands of the American people by putting our country back to work and by holding Wall Street and big corporations accountable for the damage they’ve inflicted on us all.

Hold them accountable?  How?  Either way, that doesn’t sound very civil.  I am sure Krugman will rebuke the SEIU soon.

The SEIU President Henry was not satisfied with mere words; she actually joined the protesters in New York and was arrested for her actions during a November 17th protest.

Among dwindling numbers and waning public support, the SEIU choose to attach themselves with a directionless movement that dissolved into a violent outburst.  Somehow, I doubt that will grow the SEIU’s ranks or increase its public support.

Those who stand with the Occupiers do so at their personal and professional peril.  As for the SEIU, Krugman, and Pelosi, they owe all decent American citizens an apology.  Just don’t expect one.