Rally participants will engage in skits to demonstrate to massive scope of federal spending, which has led to a federal debt that is expected to reach $16 trillion by the end of the summer. 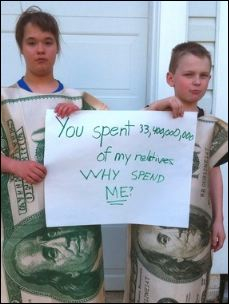 “My family operates on a budget, why can’t Washington?” asked David Almasi, executive director of the National Center for Public Policy Research and director of the National Center’s “Occupy Occupy D.C.” project. “I don’t have a magical way of paying for everything I want, and that sometimes presents tough choices. For too long, lawmakers have had all carrot and no stick. The problem is clear, but there are still too many people who refuse to acknowledge it.”

The National Center has obtained a five-week permit for Freedom Plaza share the plaza with left-wing “Occupy D.C.” protesters. Since February 13, it has sponsored noontime events promoting liberty and limited government every weekday.

The National Center for Public Policy Research, founded in 1982, is a non-partisan, free-market, independent conservative think-tank with over 100,000 recent supporters. Contributions to it are tax-deductible and greatly appreciated.