ConservativeBlog.org
Posted at 16:08h in Blog, Health by Amy Ridenour

More “war on women” nonsense from Mother Jones magazine today, which, in an article by Ben Breedlove, Maya Dusenbery, and Tasneem Raja, has set up an utterly unreliable “calculator” to make women believe they spend exaggerated sums on birth control.

To make certain readers get the Mother Jones spin that conservatives want to take away birth control, and the left wants to save it (you know, the fake “war on women”), the piece begins, not subtly:

To hear some conservative politicians tell it, you’d think birth control pills fall from the sky and IUDs grow on trees. During the recent controversy over President Barack Obama’s rule requiring insurance companies to offer birth control free of charge…

There are big problems with the assumptions in the Mother Jones article.

False assumption #1: The more expensive birth control is, the more someone else should pay for it. Quite the reverse. The more something costs, the more reluctant a person should be — an ethical person, that is — to burden another person with the costs.

False assumption #2: Someone else is paying for it. An employee earns her health insurance benefits the same way she earns her paycheck: by performing work in exchange. The employer offers what the work is worth. If health insurance costs are high, less cash pay will be offered. There’s no such thing as a free lunch — or in this case, free birth control.

False assumption #3: Mother Jones’ cost assumptions. Mother Jones claims a woman can expect to pay $57,566 to take the pill for 30 years, or $159.90 per month. By contrast, here’s what Planned Parenthood, no ally of the right wing, says: 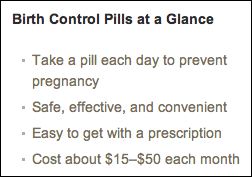 Planned Parenthood doesn’t include an annual medical exam, the cost of which, it estimates, is $35-$250. We’ll assume the exam is 100% attributable to the desire to get a birth control prescription (no routine physical, pap smear, breast screening, prescription for something else, etc. to add utility to the exam). If we go with both of Planned Parenthood’s top numbers, $50/month for the pills and $250/year for the exam, the monthly cost of birth control pills is $70.83 — less than half the cost Mother Jones is estimating.

Really useful point: If your insurance company could provide you with birth control only at Mother Jones’ or Planned Parenthood’s top prices of $159 or $70 monthly — prices that inevitably will be reflected in the health insurance premiums you earned — wouldn’t you rather have the option of keeping the $159 or $70, buying the pills for $35 or $15 or even $9 (Walmart’s price), getting a medical exam for less than $250, and keeping the change?

Just because Mother Jones, an avowed socialist, didn’t believe in shopping around, does that mean the federal government shouldn’t let you do it? That you should meekly accept that Barack Obama doesn’t want you to?