ConservativeBlog.org
Posted at 11:51h in Blog by David Almasi 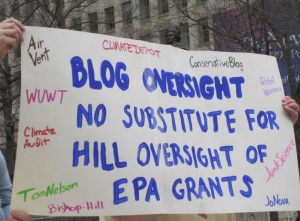 From the press release regarding today’s “Occupy Occupy D.C.” event:

“Occupy Occupy D.C.” activists will gather just steps from the headquarters of the Environmental Protection Agency at noon on Friday, February 24 to demand that Congress hold oversight hearings about possibly politicized grants made by the federal agency, and related issues.

The need for hearings, first made two days ago by the National Center for Public Policy Research in light of EPA grants made to the Pacific Institute, currently embroiled in an ethics scandal, has been heightened by the EPA’s scrubbing of its public grantmaking database on or around February 23.

The National Center is concerned that the EPA is making grants to organizations involved in policy advocacy, an inappropriate use of taxpayer monies.

Activists will gather on Friday at noontime at Freedom Plaza (13th and Pennsylvania Avenue NW) to call for a series of oversight hearings over possibly-politicized grants made by the Environmental Protection Agency.

Occupy Occupy DC activists are asking Congress to review the grants made during the last two Administrations to make certain sufficient standards of objectivity are in place; to obtain the views of respected scientists as to whether the EPA grant program is focusing its resources in the most promising areas of  and to examine the question of whether the grant program, at a time of massive deficits, is set at an appropriate spending level.