ConservativeBlog.org
Posted at 13:12h in Blog by David Almasi

Last weekend, Jesse Jackson apparently finally got the Obama Administration talking points.  He flip-flopped on his criticism of former Speaker of the House Newt Gingrich.  While Jackson previously said Gingrich’s characterization of President Obama as a “food stamp president” was “name-calling,” Jackson’s weekly address said that doling out the welfare is now an “honor” and that Obama deserves a “big hand” for being a food stamp president.

For months, Obama officials that include press secretary Jay Carney, Agriculture Secretary Tom Vilsack and senior advisor Valerie Jarrett preached that taking money from one taxpayer and giving it to another in the terms of aid is a fine way of stimulating the economy.

The notion comes from the premise that poor welfare recipients can’t afford to save their benefits and will immediately put that money into the economy.  Creating jobs could create two incomes and two revenue streams for the government, strengthen the economy as whole and lessen the welfare ranks, but let’s not get crazy.

Members of Project 21, the National Center’s black conservative leadership network, are critical of the Obama Administration’s strategy of taxing Peter to pay Paul to stimulate the economy.  In solidarity with Project 21, members of the National Center’s “Occupy Occupy D.C.” street team took to Washington, D.C.’s Freedom Plaza to bring the issue to the attention of Occupy D.C. encampment and the general public.

To follow are some photos from the Tuesday Occupy Occupy D.C. event and quotes from Project 21 members about this distressing liberal logic. 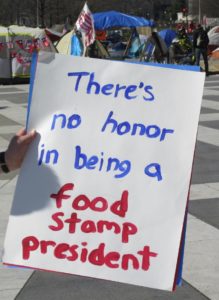 The Obama Administration is playing a shell game with taxpayer money.  There needs to be a focus on creating jobs instead of fostering dependency.  Approving the Keystone XL pipeline would create jobs, incomes, savings, benefits and revenue for the government.  Yet the Obama Administration is stopping it.  They seem to think there is more logic and dignity in telling people it is alright to stay unemployed, and they are justifying it by claiming unemployment benefits are a stimulus.  But that money comes from taxpayers who are already being squeezed.  It’s not a viable solution to fixing our economy. 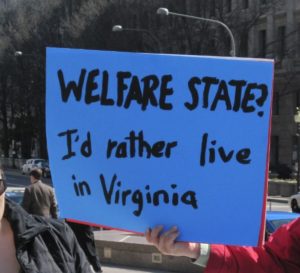 This is twisted logic.  Dr. King didn’t march and die for the perpetuation of the welfare state.  They are doing little more than perpetuating a class of jobless and poor people to shore up the rest of the economy.  Not only is it a cop-out to focus on subsidies over job-creation, but it’s creating a slave-like existence where people must rely on the government for food, medical care and other essentials. 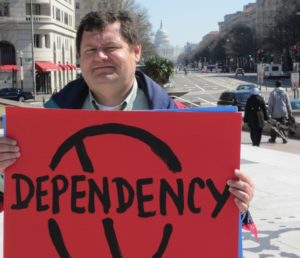 Maybe Jesse Jackson will see it as less of an honor if Obama is called the “dependency president.”  The War on Poverty of over 40 years ago created a culture of dependency that hurt the poor more than it helped.  Hurricane Katrina showed how lethal this dependency is when the government fails.  For Jackson to think that Obama should be applauded for making more and more people dependent on other taxpayers is crazy.  Recreating the generational welfare state is not a source of pride.