Posted at 11:22h in Articles, Environment and Enterprise Institute, Global Warming by The National Center

Barack Obama wants to put one million electric vehicles on the road by 2015.  That’s not going so well.  Last year, for example, there were less than 8,000 of the Chevy Volt sold.  What to do when altruism and bribes tax incentives fail? 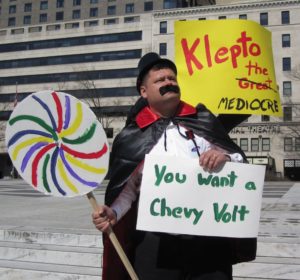 Hire a hypnotist to compel people buy one!  Meet Klepto the Great Mediocre.

In an effort to help the President meet his very ambitious goal of getting Americans behind the wheel of 992,0000 more Volts and other electric vehicles in two years, Klepto was enlisted by the National Center’s “Occupy Occupy D.C.” street team to subliminally convince people traveling through Washington, D.C.’s Freedom Plaza that they needed to buy a $40,000 Government Motors-produced Chevy Volt. 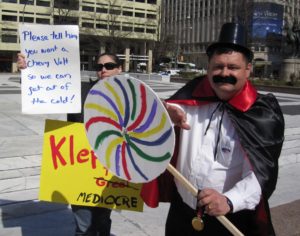 Not even his lovely assistant!

Is it the 35-mile travel radius between charges?  The steep price tag?  The fact that Americans want vehicles that meet their needs and not the wants of the liberal establishment (who likely drive SUVs themselves because they NEED them)?

Whatever the case, Klepto discovered today that his mad skills are nothing when it comes to the free will of the American people.