ConservativeBlog.org
Posted at 11:02h in Articles, Blog by David Almasi 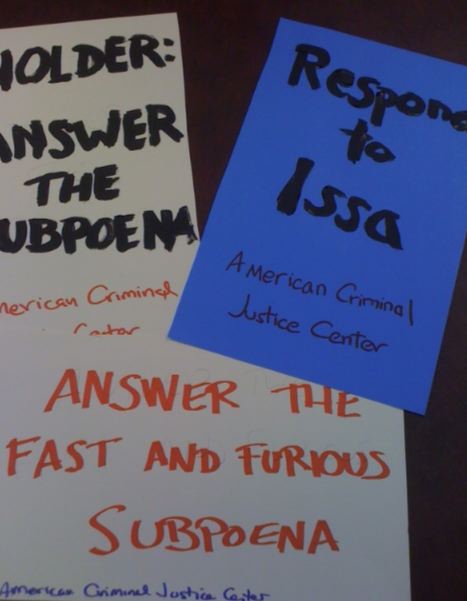 One issue of great concern to the supporters of the National Center’s American Criminal Justice Center program is the credibility of the U.S. Department of Justice under Attorney General Eric Holder.

Concerns stem from the potential political motivations regarding the 2008 New Black Panther Party’s alleged voter intimidation, possible biased civil rights enforcement and — most of all — the reported lies and cover-ups in the Operation Fast and Furious gun-walking scandal.

Darrell Issa, the chairman of the House Committee on Oversight and Government Reform, authorized a subpoena over four months ago that ordered the Justice Department to produce records related to Operation Fast and Furious.  Thus far, only a trickle of documents has been released — and those usually come only on the day before a Capitol Hill hearing on the topic.

Of the 22 categories of interest to congressional investigators, they’ve received no information for 14 of those categories!

It’s time for Holder to answer the subpoena and release the records.

Members of the National Center’s “Occupy Occupy D.C.” street team will be at Freedom Plaza (13th and Pennsylvania Avenue NW) in the early afternoon on Thursday on behalf of the ACJC to demand that Eric Holder respond to Congress.