ConservativeBlog.org
Posted at 03:55h in Articles, Blog by David Almasi 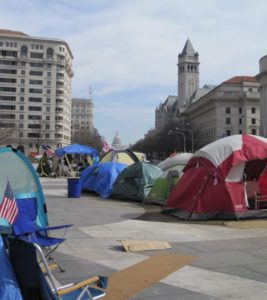 Sometime in the next few days, the Occupy D.C. encampment at Freedom Plaza will be no more.

A little over 20 days after the last National Center “Occupy Occupy D.C.” protest opposite their encampment, the members of Occupy D.C.-Freedom Plaza voted to pick up their tents and move them to Washington, D.C.’s McPherson Square — the location of the other Occupy D.C. encampment.

Occupier Lacy MacAuley told the Washington Post that the move is “something that’s been in the air for a while.”  Occupier Barry Knight, who National Center street team members had plenty of interaction with over our five weeks on the plaza, called the move “fantastic” and that “[d]iversity is strength.”  The second statement, however, is odd since he was usually never willing to recognize our shared interests in ending crony capitalism and big government bailouts (he was fixated on overturning the Supreme Court’s Citizens United decision and putting the coal industry out of business).

But the prime motivation for the Occupy D.C. merger was unlikely diversity, strength in numbers or escaping the wind that howls across Freedom Plaza.  The Freedom Plaza permit expires on 4/29/12, and there are other groups that have lawfully obtained the right to use the entire plaza.  These groups acted in the same manner as the National Center, which helped trigger some of the initial Occupy D.C. evictions from the plaza.

This move will be a load off the National Park Service when it comes to Freedom Plaza, but it raises new questions about the status of McPherson Square.  Most importantly, after the ecological devastation of the downtown park prior to the February federal cleanup, the federal government began in earnest to make the park habitable again and replace the stimulus-funded planting effort that the occupiers destroyed.  The influx of Freedom Plaza refugees and potential growing ranks as colleges let out may once again cause taxpayer dollars to be thrown down a rat hole.