ConservativeBlog.org
Posted at 17:33h in Articles, Blog by David Almasi 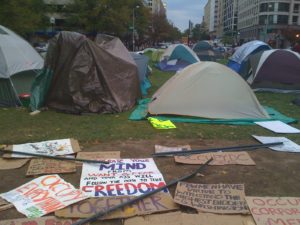 spokesman Stacy Swimp put together these comments about the radical celebration of May Day and the contradictions in their words and acts:

Protesters, many aligned with the Occupy Wall Street movement, seek to disrupt American business today in observance of International Workers’ Day (May Day).

Banks in Manhattan received suspicious (albeit non-toxic) powder in envelopes.  Businesses were vandalized.  Threats to disrupt commuters have been made.

Stacy Washington, a member of the Project 21 black leadership network, says: “The protest plan is to have major nationwide action on May Day to disrupt normal, everyday activities.  It’s attention-seeking behavior at its worst.  Like children throwing a tantrum, they should be ignored.  Without a clear goal, or objective, Occupy protesters are a constant reminder of just what this country does not stand for: rape, destruction of private and public property, filth, violence and disrespect for the American way.”

It is ironic that protesters claim their chaos is “civil disobedience.”   It’s ironic because they are commemorating past activities that promoted lawlessness and socialism.

May Day observes the 1886 Haymarket Riot in Chicago, which ignited after a protester threw dynamite at law enforcement officers who are keeping order during a general labor strike.

On that day, the cops were forced to protect themselves.  Tragically, many of them — along with many of the protesters — lost their lives.  In 1904, at the International Socialist Conference in Amsterdam called for worldwide annual protests to “stop work” and “demonstrate… for the class demands of the proletariat” in memory of the Haymarket violence.

Civil disobedience, in my opinion, is best defined as nonviolent protest of laws that are unjust.  To the contrary, Occupy radicals — from the outset — were documented as being disruptive, disrespectful and malicious in their treatment of private property.  Moreover, at least one woman has allegedly been sexually assaulted at an Occupy camp.

Rather than practicing civil obedience against unjust laws, Occupy protestors seem to show no consideration of the law whatsoever.  And their actions have hardly been nonviolent.

Like the Haymarket protestors in Chicago, they have violently lashed out at their fellow Americans.  Their cause is not a matter of civil disobedience, but is instead a matter of uncivil chaos.

Speaking on the threats and action of today’s Occupy protesters, Amy M. Ridenour — chairman of the National Center for Public Policy Research — says: “People who claim to care about the welfare of the so-called 99 percent seem in fact to care only about calling attention to themselves.  I realize at their advanced age it’s a longshot, but they should grow up.  Blocking bridges and roads does nothing for the 99 percent except make them late for work.”

It is noteworthy that the socialists and trade unions created the May Day protests as an “International Workers’ Day.”  In my mind, the forced unionism and socialism celebrated by the protesters is largely responsible for the unemployment of millions of American workers.

Union subsidies such as the Davis-Bacon Act cost American workers over 160,000 jobs per year while preventing equal access for all Americans to available jobs.

Forced unionism not only denies Americans a choice in employment, but it also violates citizens’ First Amendment right to dissent from union representation.  It’s important to note that states that have “Right to Work” laws preventing forced union membership have higher employment rates than states that do not.

Occupy protestors should remember these things when protesting in support of workers’ rights.

Internet talk radio host Kira Davis, commenting on Big Labor’s collusion with Occupy Wall Street protesters, says: “The fact that the Occupy movement is now coordinating with unions and May Day is solid proof that it is not a grassroots effort at all but an astroturfed campaign to benefit bloated, wealthy unions.  Union bosses want Occupiers — who despise capitalism — to stand with them as they strike for more money and benefits from their corporate employers.  Apparently irony really is dead.”

Occupy Wall Street and Big Labor, despite what they may believe, are not functioning in support of workers.  Instead, they are advancing a socialist agenda that has already caused higher unemployment rates and economic crisis.

A holiday is a time to celebrate.  The Occupy agenda provides the American people with absolutely no reason to be jubilant.