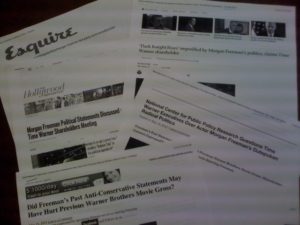 Oscar pretty much backed Time Warner chairman and CEO Jeff Bewkes into a corner about the outrageous political radicalism of actor Morgan Freeman and how it might harm the profitability of the company’s movies that feature him.

Last year, Freeman went on CNN to promote the movie “Dolphin Tale,” but ended up alienating more than half of the politically-active population when he declared that conservatives, Republicans and tea party members were acting in a “racist” manner when they opposed the President and wanted to “screw the country” in order to make Obama look bad.

At the meeting, Oscar pointed out that there is evidence that Freeman’s fiery remarks may have harmed the box office returns for “Dolphin Tale,” and that Freeman doubling-down on his extremism could potentially hurt the upcoming Warner Brothers Studios film “The Dark Knight Rises” if those who are offended decide to boycott the movie.

But Bewkes said there was “not much” he could do when an actor pipe up.

He could — as the man at the top — take responsibility for the mistake and apologize.  That’d be a start.  Bewkes could ask Freeman to “stick to the script” and not use a company press tour to promote his political predilections.  If all else fails, there are plenty of actors in Hollywood who can take Freeman’s place in the next movie.