The other day I did something I don’t usually do. I left a comment on a very silly blog post suggesting that the blogger, “Condor,” might want to retract his post before we got around to rebutting it, because if he retracted it before we rebutted it, he’d have less egg on his face.

I should have remembered that liberals like egg on their faces. Condor invited me to whip up a meal.

The following screen snap of part of Condor’s article gives you his argument: We allegedly attended the shareholder meeting of Merck, and not those of Eli Lilly, Johnson & Johnson, Pfizer and GlaxoSmithKline, because Merck’s CEO is black 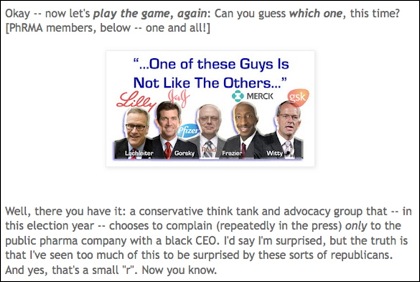 Egg, meet omelet. We attended the shareholder meetings of all the American companies Condor listed. Condor was just so sure we are racist, he forgot to check to see if we had.

Condor’s headline, “One Of these Guys Is NOT Like The Others… One Of These Guys, Just Doesn’t Belong…” was actually right, though. One of the companies didn’t belong: It’s British. So far at least, we only focus on American companies. (We figure the British companies are already saddled with the NHS, and don’t need any more torture.)