Posted at 13:35h in Health by The National Center 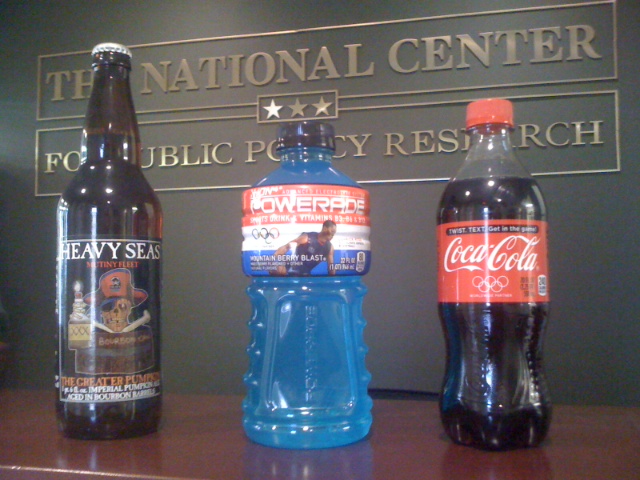 Under the proposed beverage ban, only one of these three drinks could be purchased in a New York City restaurant if Mayor Michael Bloomberg has his way.  Can you guess which beverage Bully Bloomberg would seem to consider the least offensive to his sensibilities?

On the left is Heavy Seas The Great’er Pumpkin imperial pumpkin ale.  It’s 22 ounces, 9 percent alcohol by volume (for contrast, Miller Lite is 4.2 percent) and estimated to be 270 calories.

In the middle is Powerade Mountain Berry Blast.  It’s 32 ounces (allegedly 2.5 servings), non-alcoholic and approximately 213 calories if consumed in one sitting.

On the right is Coca-Cola Classic.  Its 20 ounces are also non-alcoholic and is 240 calories.

If you guessed the beer is the exempted beverage, you’d be correct.

Under the spirit of the proposed Bloomberg ban, a super-strength beer would be considered less of public nuisance than the sports drink or the soda.  At present, there is no suggestion that the ban will apply at all to alcoholic beverages.

While the language of the ban has yet to be formalized, other things that are not alcoholic but are also expected to be passed over include the 870-calorie, 22-ounce chocolate McCafe milkshakes at McDonald’s and the 670-calorie, 24-ounce Venti Double Chocolaty Chip Frappuccino Blended Crème at Starbucks.