Last week, I attended Target’s annual shareholder meeting in Chicago to try and extract some information from company executives about the Target’s costly sustainability programs.

As you can hear in my exchange with the Target’s general counsel Tim Baer, the company isn’t saying how much it spends annually on so-called “sustainability,” nor is it telling customers how much the products it sells are marked up to comply with the retailer’s agenda.

While it was disappointing, and even a little shocking, that a major retailer would refuse to address this simple call for transparency, Target executives did stand their ground against some rowdy protestors and the demand of another shareholder.  Target will not remove the criminal history question from its job applications.

Target, like nearly every other corporation in America, has a standard criminal history question on its job applications.  While the company does not automatically disqualify candidates with criminal records, that information becomes part of a larger picture in identifying and selecting candidates to don Target’s khaki and red uniforms.

This reasonable business practice makes sense to just about everyone except some Target protestors and the federal government.

During the shareholder meeting, Kelley Ford of Take Action Minnesota tried to pressure Target executives to “just remove the question about the criminal records from the application.”  Target’s executive vice president of human resources, Jodeen A. Kozlak, swiftly replied: “No, we will not do that.”

Take Action Minnesota has a project called Justice 4 All that, according to its website, “urges Minnesota employers, including 3M, Target and Best Buy, to remove questions about an applicant’s criminal record from job applications and give all people an equal chance at being interviewed and hired.”

Outside of the Target meeting, protestors were in full angst over the issue hours before the meeting began.  Led by convicted sex offender Frank Brown, a jumbled band of union members, MoveOn.org agitators, Common Cause activists and Occupy Wall Street leftovers marched up and down the sidewalk in front of the new State Street city Target store that was the location of the shareholder meeting.  The rabble of ex-convicts and misfits had many complaints; corporate money will ruin elections (they somehow missed the irony that the unions, which many of them represented, spend small fortunes to influence elections), cries that they were the 99 percent and other incoherent garble. 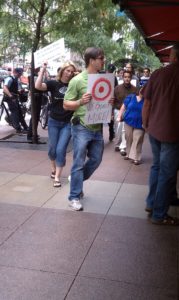 What was truly disturbing however were their calls for Target to remove the criminal history section from its applications.

According to Justice 4 All, America’s criminal justice system is racist and discriminatory against persons of color.  Therefore, employers need to forget about criminal history so more blacks can get work.

While it seems disturbing, this is not a new idea.

The federal Equal Employment Opportunity Commission (EEOC) has been floating a version of this policy around for years.  On April 25, it issued new enforcement guidance curtailing employers’ ability to use criminal background checks in hiring.

According to the EEOC:

An employer’s use of an individual’s criminal history in making employment decisions may, in some instances, violate the prohibition against employment discrimination under Title VII of the Civil Rights Act of 1964, as amended.

When will the EEOC determine that an employer has violated a job applicant’s civil rights?  Most likely when the employer asks a black or Hispanic candidate to disclose their criminal past.

According to the EEOC, there has been in increasing number of working age adults who have had “contact” with the criminal justice system in recent years, and “[a]rrest and incarceration rates are particularly high for African American and Hispanic men.  African Americans and Hispanics are arrested at a rate that is 2 to 3 times their proportion of the general population.”

So President Barack Obama’s EEOC is essentially inventing a new protected class under Title VII because, in the eyes of federal bureaucrats, blacks and Hispanics apparently cannot control their behavior and inherently break the law.  Is this what a post-racial society looks like?

the EEOC is concerned because blacks and Hispanics are more likely than whites and Asians to have criminal records.  That means, in the bean-counting eyes of EEOC bureaucrats, that employers who perform background checks are discriminating against blacks and Hispanics… It is an outrage for EEOC officials to ascribe sinister racial motivations on employers who only want to maintain a safe working environment.

When parsed out, the EEOC’s logic is so convoluted it collapses on itself.

One the one hand, the EEOC is telling employers, “don’t worry, hire criminals, they are contributing members of society.”  But on the other hand, an EEOC spokeswoman told the Wall Street Journal, “if ex-offenders are not given jobs the chances are that they may re-offend.”

In May, three commissioners from the United States Civil Rights Commission wrote to congressional leaders to voice their concern that such EEOC guidance may cause significant damage to the subset of workers that the EEOC aims to protect.  Following the law of unintended consequences, the commissioners pointed out that the EEOC guidance may actually make it more difficult for black and Hispanic males to find work.  They explained:

So the EEOC sets out with the intention to help black and Hispanic applicants obtain work, but it turns out their plan may make it even harder for minorities to find jobs.  If that doesn’t neatly explain how government fixes problems, nothing does.

And the EEOC guidance has many more problems outside of its unintended consequence of harming minority job seekers.

The EEOC guidance places employers in an impossible catch-22.  If an employer asks too much information about a job applicant’s criminal history, they face a potential federal lawsuit under Title VII of the Civil Rights Act.  If they don’t get enough information regarding an applicant’s criminal past and hire someone who does end up perpetrating more crime, they may face a lawsuit under state law for negligent hiring.

When faced with a negligent hiring lawsuit, an employer’s outlook is quite bleak.  As reported in Inside Counsel magazine, “[a]ccording to Clint Robison, a partner at Hinshaw & Culbertson, employers lose negligent hiring cases 75 percent of the time, and the average settlement of such claims is $1 million.”

So if a company drops the criminal history section from its application due to a fear of a federal lawsuit by the EEOC, but subsequently loses a state-level negligent hiring lawsuit, who pays the damages?  Is the EEOC (meaning the U.S. taxpayer) going to pay those claims?  What about Justice 4 All?  Perhaps its ex-convict spokesperson Frank Brown will pony up the money?

America is the land of opportunity and of second chances.  If an employer knows that a job applicant committed a crime unrelated to a specific position, and they interview that individual and find they are remorseful and would be a good fit at their business, they should hire them – and they often do.

What this country does not need, and should not suffer, is an out-of-control federal bureaucracy demanding that employers abandon background checks along with radical activist groups pressuring corporations to do the same.

In February, the EEOC requested $373,711,000.00 for its fiscal year 2013 budget.  To justify stealing that much money from the taxpayers, it seems the EEOC is inventing new forms of discrimination that don’t exist.

Politicians always wring their hands and bemoan making hard cuts … this is an easy one.