ConservativeBlog.org
Posted at 15:34h in Articles, Blog by David Almasi 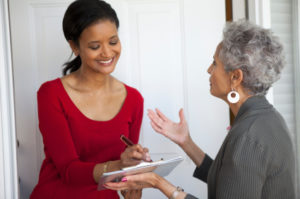 Black woman signs a petition at her front door

For the audacity of wanting a vote, a Maryland woman may lose her job.

Earlier this year, Angela McCaskill and over 200,000 other Maryland voters innocuously signed a petition to turn the state’s recently-passed gay marriage law into a referendum (now on the ballot for this November).  If passed, it would rescind legalized gay marriage in the land of pleasant living.

McCaskill signed the petition on a Sunday after attending a church service.  On weekdays, she serves as the top official in charge of diversity issues at Gallaudet University in Washington, D.C.  Therein lies this challenge to democracy.

In late July, the Washington Blade — a gay-oriented newspaper — posted a database of the signers of the proposed Maryland initiative petition on their web site.  Another gay-oriented web site, Planet DeafQueer, reported on October 8 that a Gallaudet faculty member found McCaskill’s name in the database and confronted her about it.  That same person filed an official complaint with the university administration and a meeting was reportedly held on October 5 to discuss the implications of McCaskill’s civic activity.

While Planet DeafQueer reported that McCaskill would likely be apologizing for having signed the petition, there was no such public self-admonishment.  On October 10, Gallaudet University president T. Alan Hurwitz placed McCaskill on indefinite administrative leave.  Hurwitz explained that McCaskill “participated in a legislative initiative that some feel is inappropriate for an individual serving as Chief Diversity Officer.”  He added that he would use the duration of her suspension to “determine the appropriate steps.”

It was mentioned that there would be an interim CDO named, so it would appear that there’s a feeling on campus that McCaskill’s action constituted grounds for termination.

It would be an ignominious end for the 24-year Gallaudet employee who also happens to be the first black woman to obtain a Ph.D. from the university (which is a federally chartered university serving deaf and hard-of-hearing students).  She became the first associate provost of diversity and inclusion in January of 2011.  She presided over the creation of the Gallaudet’s Lesbian, Gay, Bisexual, Transgender, Queer and Ally Resource Center in October of 2011.  In February of 2011, Hurwitz lauded McCaskill as a “cherished colleague and friend” and called her “a longtime devoted advocate of social justice and equity causes.”

For those who care about race, McCaskill is black.  Hurwitz is white.  Her dismissal, according to the Blade, would “remove one of the university’s few high-level black administrators.”

There’s no way around the fact that Angela McCaskill was suspended from her job at a heavily publicly-subsidized university for engaging in a perfectly legal activity that enhances the democratic process.

Signing a petition like McCaskill did should never be considered an endorsement of an issue or a candidate — it is a simple exercise to show there is public support for a cause or candidate so that public funds aren’t wasted on fringe issues or officeseekers lacking serious ambitions.  For instance, Michelle Obama could have signed a petition to put Mitt Romney on November’s ballot in Illinois even though it’s likely she wouldn’t vote for him (nor would she be under any obligation to do so after signing the petition).

Regarding Maryland’s gay marriage referendum, however, it is being unjustly implied that signing the petition means one is against gay marriage.  To the contrary, bringing the issue to the voters could not only resolve the acrimony related to the slim margin of victory and divisive debate over the “Civil Marriage Protection Act,” it could also give gay marriage supporters the chance to actually win a statewide referendum after a history of electoral losses for the issue (the campaign for gay marriage in Maryland is well-funded and polls show it running even in mid-October).

But McCaskill got caught up in a relatively new theater of political warfare in which reputations are smeared and lives can be ruined as a means to an end.

Modern left-wing political activists are increasingly intolerant of these who stand in the way of their agenda, and it seems there is nothing they will not do — including ruining someone — to win.

Rather than let the voters of Maryland weigh in on such a divisive issue in November — as they will in-state tuition benefits for illegal aliens, expanded casino gaming and gerrymandering — the left wants to close the books forever on the issue and ignore the will of the people since they already got what they wanted from the legislature.

Gallaudet administrators are acting as willing pawns for the left’s agenda of intolerance by punishing McCaskill.  And allowing this to happen will only embolden increased intolerance.

Consider the backlash against supporters of a similar marriage referendum in California in 2008.  The intimidation there included threats against donors, signers and supporters that included vandalism of supporters’ property, threats and racial taunts made against supporters, specific demonization of the Mormon faith and — in some cases — donors who were singled out were forced to resign from their jobs.

It’s a disgusting strategy that feeds on hate and puts the democratic process at risk.

As the Washington Post pointed out in an editorial supporting McCaskill, Gallaudet’s description of its diversity regime claims it exists to “provide a supportive and enriching environment” through “facilitating open sharing of thoughts and ideas.”  The Postopines: “Firing, or threatening to fire, a diversity officer for off-campus political activity strikes us as inconsistent with ‘open sharing of thoughts and ideas.’”

Worse still, McCaskill wasn’t doing anything regarding the Maryland initiative as blatant as making a donation, working a phone bank or even putting a bumper sticker on her car or a button on her lapel.  She simply signed a petition saying that the issue was relevant enough to go before the electorate.  To this day, McCaskill has not said publicly if she supports or opposes the ballot proposal.

Reverend Derek McCoy, the executive director of the Maryland Marriage Alliance — a group supporting the initiative, rhetorically asked in the Washington Times: “If her employer is able to restrict her right to engage in the petition-gathering phase of democracy, are they also allowed to enter the voting booth and dictate how she votes?”

In a display of unity over this heinous situation, support for McCaskill also came from the group opposing the initiative.  In the Blade, Marylanders for Marriage Equality campaign manager Josh Levin said: “We strongly disagree with the decision to put the chief diversity officer on leave and hope she is reinstated immediately.  Everyone is entitled to free speech and to their own opinion about Question 6, which is about treating everyone fairly and equally under law.”

President Hurwitz appears unswayed by the mass opposition to his action.

Despite criticism from both campaigns in the election contest, criticism from the Washington Post, over 15,000 people signing an on-line petition in support of McCaskill and prominent politicos such as Tony Perkins of the Family Research Council suggesting Hurwitz should be fired instead of McCaskill, there is no movement by the Gallaudet administration to reinstate McCaskill.

McCaskill retained a lawyer.  She is now asking for her job back and for damages for emotional distress.  At a October 16 press conference, she criticized Gallaudet officials for “intolerance” and fostering “a university that allows bullying among faculty, staff and students.”

Hurwitz released his own statement acknowledging an apparent continued confusion about why someone in McCaskill’s position would sign a petition to put something up for voter consideration.  He also doubled down on his “prudent” decision to suspend McCaskill.

Hurwitz even said he thought the crisis would help the Gallaudet community “emerge stronger because of this situation.”  Stronger, as in making political intolerance an unmistakable and unshakable value on the campus?

In 2011, Gallaudet University received the overwhelming bulk of its revenue — over $124 million, or almost 75 percent — from government grants.  The President of the United States signs the diplomas of its graduates — a very unique perk compared to peer schools.  But officials also must report annually to the Secretary of Education.

If Angela McCaskill is not reinstated, there are at least two branches of the federal government that need to begin some serious investigations into this threat to democracy.  The school’s existence is reliant on the money that comes from American taxpayers, and the spigot ought to be shut off until it can be confirmed that the school is no longer openly hostile to the democratic process in favor of extremist demands about diversity.