ConservativeBlog.org
Posted at 15:00h in Articles, Blog by David Almasi

I voted, and I survived.

Early voting began in my area on Saturday morning, and I took full advantage of the convenience.  I stopped by the county government center near my house on the way home from errands.

Despite all of the liberal handwringing over how our electoral process is at risk of being compromised by onerous regulation or conservative conspiracy, it was refreshingly easy.  Then again, maybe it was easy because I wasn’t looking for an excuse to complain.

Actually, I was looking to find something scary, exasperating or intimidating about the experience.  It was easy because I couldn’t find any impediments to voting.

I live in Virginia — a state with mild voter ID protections.  I had my driver’s license with me, but I also had my state-issued voter registration card with me.  A similar card was recently mailed out to all registered voters in the commonwealth.  I could have also brought along the 12-year-old voter registration I still have at home that I’ve managed not to lose, a utility bill or my Social Security card.  Election officials, however, were perfectly happy with that new registration card.

I would have preferred the election officials only be satisfied with a photo ID such as a driver’s license, state-issued ID or an employee ID.  Photo ID is the one easy commonsense way to protect against voter identity theft.  At least some ID is better than none at all. 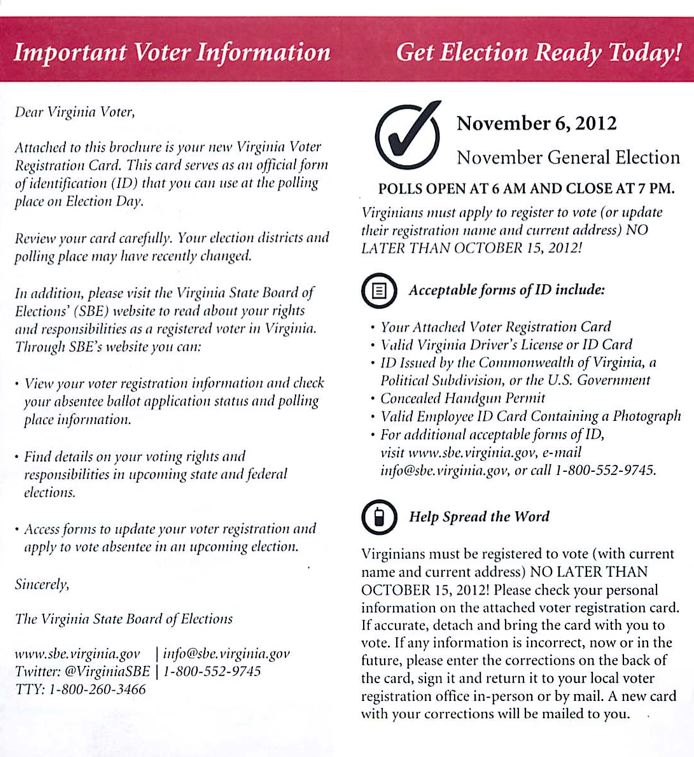 There were representatives of both parties hanging around outside the building where the polling place was set up.  They were offering voters sample ballots in case they wanted any suggestions of how to vote (I didn’t need any help, but politely took them).  Neither made me feel uncomfortable or compelled me to leave.

There were no New Black Panther Party members with billy clubs at this polling place.  Nor were there any tea party activists giving people the evil eye.

Once inside the government center, the fact that most of the building is dominated by a county police substation did not make me want to run away and not vote — although the couple complaining to the officer on duty about the danger allegedly posed by realty signs in the median strip near their house made me roll my eyes.

As the votes were still being counted and re-counted (and re-counted) in Florida in 2000, some liberals were intent on finding a conspiracy that involved police interference in the voting process.  When all the facts became known, it was less of a conspiracy than initially speculated — but officers doing their job was nonetheless frowned upon by one then-liberal-dominated federal commission.

A relatively new complaint raised by liberals concerns the long-standing practice of having poll watchers on hand during voting to keep things fair.  Even though both major parties regularly have poll watchers (when they can find enough volunteers to fill the positions), this perfectly legal practice is now being likened to bullying.

There was a poll watcher in my polling place.  I have no idea what party she represented.  She appeared to be taking notes on what was going on in the polling place, and she actually did seem to give me the evil eye when we made eye contact.  I could have cared less.  I still managed to find the inner strength to vote for exactly the same people and issues I planned to when I first got in line.

Actually voting was simple.  My polling place uses touchscreen voting machines.  Even though there are conspiracy theories about stolen votes, I found the process was very straightforward and user-friendly.  Voting for all of the federal offices and a handful of constitutional amendments and bond issues took just a few minutes.  The entire process took less than 15 minutes.

There was a man who needed assistance because he was not fluent in English.  He looked to be having no trouble while I was in the polling place.  I didn’t stick around because it would have been inappropriate.  While looking for problems, I didn’t want to become one by inappropriately lingering.

What’s my point?  There was every opportunity for me to experience the terrible barriers to voting that liberals have been fear mongering about for the entire election season.  There was nothing.

Intimidation or other barriers to voting are not something to be judged by emotion.  Such accusations must be observed, measured and documented.

Likewise, the rampant speculation of how bad things will be in this election is inappropriate and serves only to needlessly enhance frustration and bad feelings.

While my experience was on a small scale and without the large numbers to be expected on Election Day, what I experienced in my early-voting polling place in Fairfax County was an indicator on a small scale.  It passed with flying colors. 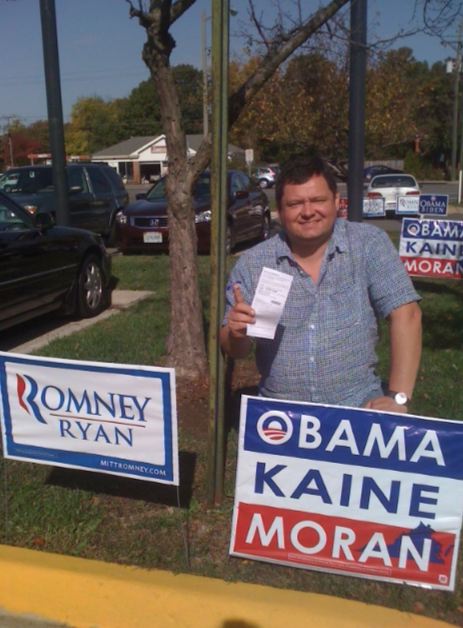