ConservativeBlog.org
Posted at 13:35h in Blog, Health by David Almasi 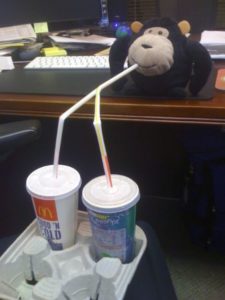 is on H Street NE.  Jumbo Slice Pizza is in Adams Morgan.  Kramerbooks and Afterwords Cafe serves jumbo lump crabcake in one of its “specialty” pasta dishes.

Jumbo sodas, however, may become a thing of the past in Washington, D.C.

During a recent candidate forum, two current members of the D.C. city council adamantly endorsed a potential ban on large sugary drinks in the nation’s capital.  According to a report by WTOP radio, this announcement caused fellow councilmember Mary Cheh to become “very excited.”

Cheh previously introduced legislation to slap a special tax on sugary drinks.  It failed at the time by just one vote.  She told WTOP that she would like to see D.C. impose a New York City-style ban on the beverage choices of its citizens, commuting workers and tourists who come to see where our freedoms are protected.

In New York City, restaurants and other businesses (but not convenience stores or groceries) that are under the thumb of the Board of Health (an agency controlled by appointees of nanny-state hero Mayor Michael Bloomberg) cannot dispense certain sugary beverages (frappuccinos – OK, Pepsi – not OK) in sizes of over 16 ounces.

According to that WTOP report, at least five member of the D.C. City Council — Cheh, Michael Brown, Vincent Orange, Phil Mendelson (the chairman) and Tommy Wells — are supportive of a ban on sugary beverages.  No language to impose such a ban has been introduced.

Mayor Vincent Gray, who is mayor right now (check back regularly to make sure he hasn’t resigned yet), thinks a ban might have some “good health reasons” and “we’ll be happy to look at it.”  Otherwise, Gray’s office wouldn’t take a position.

Two members of the council — Jack Evens and Muriel Bowser — appear to be against a ban.  Bowser, in particular, said: “I think people can choose what to eat or drink.”  David Catania, an independent who claims libertarian leanings, can reasonably be considered a vote against a ban on free choice.

This means the current whip count for a jumbo soda ban is five-to-three with four undecided.  The WTOP report did not say whether or not Councilman Marion Barry supports a ban on large amounts of Coke being sold in D.C.

But there is a final check on D.C.’s potential behavioral bullying that did not affect Bloomberg’s ban in the Big Apple.  By the terms of the Home Rule Act that established D.C.’s legislative process, Congress has the final say on whether the bills passed by the D.C. City Council actually become law.

Capitol Hill has the power to make a D.C. soda ban lose its fizz.

Only time will tell.  Nothing regarding this newest nanny state incursion will likely be considered until 2013.