ConservativeBlog.org
Posted at 13:22h in Articles, Blog by David Almasi 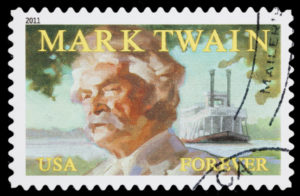 Sacramento, California, USA – September 27, 2011: A 2011 United States postage stamp with an illustration of Mark Twain (the pseudonym of Samuel Clemens, 1835-1910), with a steamboat in the background. The stamp was designed by Phil Jordan and Gregory Manchess, using a portrait of Twain photographed around 1907.

With the Bears beating the Lions, the Giants routing the Cards and the presidential nominees debating foreign policy this past Monday night, not many people were thinking about the Mark Twain Prize for American Humor being handed out over at the Kennedy Center in Washington, D.C.

Once again, it would appear that the criteria for winning the prize had more to do with politics that schtick.  It’s not a laughing matter, and it calls the viability of the prize into question.

This year’s Twain Prize went to Ellen DeGeneres.  As pointed out in the Washington Postarticle about Monday’s event, “the all-star tribute was as much about the joyful comedian’s landmark personal revelation as about her comedic talents.”

That revelation is that DeGeneres came out of the closet, declaring herself a lesbian, in 1997.  During her Kennedy Center salute, it would seem that her sexuality trumped anything having to do with her ability to make people laugh.

Comedian Lily Tomlin plainly admitted the bias of the event, saying about DeGeneres: “She went from stand-up to standing for something.”  Actor Sean Hayes similarly opined: “You’ve changed America.  You’ve changed the world.  We didn’t have a voice until there was you.”

Homosexuals didn’t have a voice in entertainment until a mildly-successful comedian in a mildly-successful situation comedy came out of the closet?  Puh-lese!  Billy Crystal, the 2007 Twain Prize winner, played a gay leading character on “Soap” 20 years before DeGeneres came out on the air.  “Love, Sydney” featured Tony Randall as a gay character in a leading television role back in 1981.

Over the past three years, however, it would appear that the Twain Prize was all about politics.  The first 11 years that the prize was awarded saw more deserving kings and queens of comedy honored.  Among those earlier recipients are Crystal, Carl Reiner, Bob Newhart, Neil Simon and Lorne Michaels — people who made America laugh as well as inspired, encouraged and fostered new comedic talent for future generations.

In 2010, things began to change.  Tina Fey — just 40 at the time and boasting a thin resume — got the prize.  Mark Krantz, the executive producer of the Twain program, claimed Fey was “at her apex” in 2010.  More likely, the prize was a thank you from the liberal establishment for her special return to “Saturday Night Live” in 2008 to portray then-vice presidential candidate Sarah Palin as a simpleton.  Fey’s mocking was effective, especially considering that a poll commission by talk radio host John Ziegler just prior to the 2008 election found that 86.9 percent of surveyed Obama voters thought that it was actually Palin who said she could “see Russia from [her] house” (it was Fey on SNL).

In 2011, the prize went to 44-year-old Will Ferrell, another SNL alum in a career rut who carved out a niche in the lucrative market of portraying former president George W. Bush as an idiot (on the Internet, television and Broadway).

Shaking things up a bit, the DeGeneres award appears to be a pivot from antagonism to advocacy.  Be a high-profile activist for a liberal cause (gay rights, in this instance) and you’ve got an advantage over the competition.  Giving President Obama cover when he came out in favor of gay marriage probably didn’t hurt either.

DeGeneres — who is 54 — needed all the help she could get to receive the honor.  She has a popular daytime talk show these days, but does that justify someone for the Mark Twain Prize for American Humor?  That credit didn’t win a prize for Johnny Carson, Jay Leno, Steve Allen or Jimmy Kimmel.  The only past winner involved in a talk show is 2001 recipient Whoopi Goldberg, who didn’t officially join “The View” until 2007.  David Letterman is getting a Kennedy Center Honor this year, but that’s a different award.

The Postarticle on the DeGeneres tribute called her film career “forgettable.”  Her only role of note is in “Finding Nemo,” and that was voiceover work.  Her first television show lasted only four seasons, taking a nosedive in the ratings after DeGeneres came out on–screen and off and — in the words of the Post’s Paul Farhi — became “a cultural pioneer.”  But America wanted laughs, not lectures.  Another DeGeneres show a few years later lasted less than four months.

As mentioned previously on this blog, there is plenty of legendary talent the Kennedy Center staff is overlooking so that they can give attaboys to comedians who use their skills more to craft opinion than deliver the funny.  Carol Burnett, Mary Tyler Moore, Sid Caesar, Mel Brooks, Joan Rivers, and Woody Allen, for example, have been bypassed for mediocre — albeit more contemporary — celebrities.

Yet SiriusXM satellite radio recently had a special event saluting Burnett on one of the service’s comedy channels.  In the commercial advertising the program, contemporary comedian Amy Schumer — the host of the program — called Burnett “beyond inspiration[al]” and said that she would not have her own show today if not for the previous work of Burnett.  But the only people who seem to want to honor Burnett these days is her former high school, Hollywood High.

Hollywood agent Fred Wostbrock said of Phyllis Diller last August: “She was the first lady of stand-up comedy.  She paved the way for everybody.  She paved the way for Joan Rivers, Chelsea Handler, Roseanne Barr, Ellen DeGeneres and all the women stand-up comics.  She was the first and the best.”  But Diller won’t get the prize next year because the praise was made in Diller’s obituary.

It seems that politics has mortally corrupted the process.  Consider the comment made by comedian/actor John Leguizamo at the tribute: “How about that?  A gay woman on PBS — with public money and the Kennedys.  It’s like a Tea Party’s worst nightmare.” (The ceremony will air on PBS later this year.)

Indeed.  Because it’s no longer funny, it’s probably time to pull the plug on this mess.  The time has long passed in which the Prize could have gone out on top.  Now, the only way to redeem any semblance of professionalism at the Kennedy Center is to just drop the Mark Twain Prize for American Humor from its programming altogether.

Alas, this will not likely be the case.  In fact, I’m willing to guess next year’s winner — right now — almost a year in advance.

Drum roll… The 2013 recipient of the Kennedy Center for the Performing Arts Mark Twain Prize for American Humor will be… George Lopez!

Kennedy Center president Michael Kaiser is currently in hot water with Hispanic activists.  After the recent announcement of the 2012 Kennedy Center Honors, the National Hispanic Foundation for the Arts complained there have only been two Hispanic recipients of the honor in 35 years.

Foundation chairman Felix Sanchez told the Washington Post: “This is a classic example of the problem that we, as Latinos, have in the entertainment industry, in the news industry:  We are not present.”  Actor Jimmy Smits is pressing the Obama Administration with a veiled political threat, saying: “The last thing you want is for the President and First Lady to find themselves presiding over an event that is locking out Latinos.”

The situation along the Potomac is so tense that a telephone conversation between Kaiser and Sanchez on September 14 effectively ended when Kaiser told Sanchez to “f—- off.”  Kaiser’s September 27 apology letter said “the concerns you raised… will be given serious consideration.”

Considering the Twain Prize is already mired in rewarding people for their activism, why not add identity politics to the mix?

So get ready for George Lopez… or Cheech and Chong.

As the Twain Prize devolves into open mic night, the best thing to do is turn out the lights.