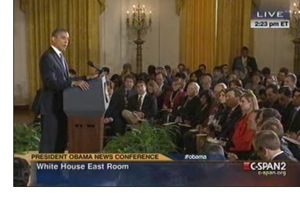 In his just-completed press conference, President Obama made the false claim that the Earth is getting hotter. He even claimed it’s getting hotter at a faster rate than was predicted even ten years ago. Specifically:

Reporter: In his endorsement of you a few weeks ago, Mayor Bloomberg said he was motivated by the belief that you would do more to confront the threat of climate change than your opponent. Tomorrow you’re going up to New York City, where you’re going to, I assume, see people who are still suffering the effects of Hurricane Sandy, which many people say is further evidence of how a warming globe is changing our weather. What specifically do you plan to do in a second term to tackle the issue of climate change? And do you think the political will exists in Washington to pass legislation that could include some kind of a tax on carbon?

President Obama: You know, as you know, Mark, we can’t attribute any particular weather event to climate change. What we do know is the temperature around the globe is increasing faster than was predicted even 10 years ago.

The President is wrong about the planet getting hotter.

Data collected from 3,000 land and sea locations around the globe, jointly released last month by Britain’s Met Office Hadley Centre and the Climatic Research Unit of the University of East Anglia (both institutions associated with the man-caused global warming theory), show that from early 1997 until August 2012 there was no noticeable rise in global temperatures.

In other words, the Earth’s temperature has been steady since 1997.

Before 1997, there was about 20 years of warming. Prior to that, there were stable or declining temperatures for about 40 years. The Earth has warmed about 0.75 degrees Celsius since 1880, which is soon after the Little Ice Age ended.

To President Obama’s credit, he did correct the reporter’s false implication that Hurricane Sandy is an indicator that human-caused global warming is taking place. Weather happens, he essentially said, and rightly so. The reporter, who was identified by the President as Mark Landler, who works for the New York Times, should never have made such an irresponsible statement.