ConservativeBlog.org
Posted at 06:17h in Articles, Blog by Amy Ridenour

Steven Crowder wasn’t the only member of the National Center family having interactions, so to speak, outside the state capitol in Lansing today.

Stacy Swimp returned after an eventful Friday there. 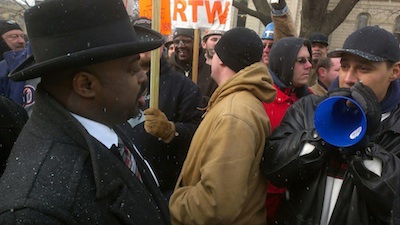 I was surrounded, at one point, with union terrorists, at every side, as they yelled affectionate comments to me such as:

“How much they paying you, Boy!”

“Martin L. King would spit in your face!”

“You are a shame to your race!”

Keep in mind that these are, if not some of the identical people who have called Tea Party activists “racists,” they are representing people who do it often.

I had no idea I would have my intellect challenged by protesters today. 🙂

I’ve no doubt MSNBC had cameras there. I’m wondering if Rachel Maddow, Al Sharpton, Ed Schultz and the other sterling intellects at MSNBC who are so quick to call conservatives names will object to a black man being called “Boy” in Lansing.

Probably not. Imaginery racism by conservatives is more newsworthy to MSNBC than the real thing by union activists.

Can anyone who has seen or attended one even imagine this behavior at a Tea Party rally?

Addendum, 12/11/12: Stacy sent over a note this evening with an additional anecdote. Everything that follows is from Stacy:

On the way to my car, from the Office of Americans for Prosperity, I was approached by a couple of union thugs. They remembered me from by the AFP tent.

I had told one of them:

“You, Sir, are a coward. You are real tough guy when you have 10,000 people to back you up. More than that, you are a domestic terrorist!”

He was livid. He started telling me: ‘Let’s me and you go some place, Boy!”

His friends then pulled him away. Fast forward.

So, when this same guy and his partner see me, they walk in front of me to try to impede my being able to get to my car.

He starts trying to bait me: “What you want do now. Huh? Want to go to my house?”

I responded: “I am not afraid of a terrorist. You are a criminal. They need to get you off of the street, as you are a menace. Whatever you are going to do, do it and let’s be done with it, but I am not going to be intimidated by a terrorist.”

He kept talking stuff about Right to Work.

When they saw I was not intimidated, the began to walk away. A woman, who was with them, yelled back at me, as they walked away: “You were just trying to bait him!”