30 Dec 2012 In a Government Health Care System, Your Medical Records are Kept Safe — From You

ConservativeBlog.org
Posted at 18:46h in Blog, Health by Amy Ridenour 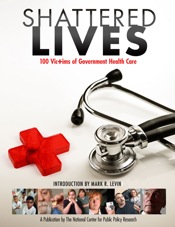 Nothing illustrates the attitude of big government, and big government health care, like this story uncovered by the Scotsman about an IT scandal within Britain’s government-run health care system, the National Health Service (NHS).

It seems “unethical” NHS employees have been caught breaching confidentially rules: They looked at their own medical records.

The employees, who work for NHS Lothian, a region of the health system that includes Edinburgh, had the temerity to assume that their own medical records were their own business. Or at the very least, that they had as much right to read them as some other government employees did.

“Quite a lot of [the confidentiality breaches are] people going in and having a look at their own medical records out of curiosity. There is a fair warning system on the computers but people don’t always read it and they don’t actually realize they’re not allowed to look at their own records, but it’s treated the same way as if they looked at someone else’s,” said Tom Waterson of Unison, the union representing employees of the NHS, according to Daniel Sanderson, writing in the Scotsman’s December 29, 2012 edition. “Usually they get a final written warning but if you breach it again then you’re out.”

Fired for looking at your own medical records. If you think it couldn’t happen here, think again.