ConservativeBlog.org
Posted at 17:44h in Blog, Environment and Enterprise Institute, Global Warming by The National Center 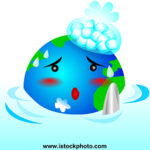 The United Nation’s Inter-governmental Panel on (Man’s Tiny Contribution to) Climate Change (UNIPCC) meeting in Doha, Qatar at the end of 2012 generated an avalanche of “global warming” and “catostrophic climate change” headlines.

Then, on Christmas Eve, the UK weather office – the “Met” as it is called – very quietly posted changes to its “global warming” charts, admitting that previous forecasts of catastrophic climate change were overstated.

Dead silence from the press.

If the bloggers hadn’t commented on the Met’s retraction, we never would have heard about it at all.

This silence was then followed by another round of “catastrophic climate change” stories when the US National Oceanic and Atmospheric Administration (NOAA) issued its State of The Climate (SOTC) report for 2012.

Keeping with the fashion, NOAA chose a headline focusing on warm weather patterns in the Lower 48 states.  Its headline declared 2012 was the “warmest year” since record-keeping began in 1895. Added NOAA:

And so readers began 2013 buried under another avalanche of column inches about man-made catastrophic climate change and fears of global warming.  One writer urged President Obama to leave a legacy of more red tape and regulation on human activity in order to “save the planet” from ourselves.

Whoa! Not So Fast!

But “Not so fast!” said bloggers and scientists trying to keep government honest.  They complained NOAA was comparing apples to oranges when it declared 2012 the “warmest year”:

NOAA has inflated the 2012 record maximum number by adding new stations which didn’t exist during the hot years of the 1930s. That is a completely illegitimate approach, suitable only for government workers.

Even NASA, another government agency that keeps temperature data, warns against comparing apples to oranges:

In our analysis, we can only use stations with reasonably long, consistently measured time records.

So here’s what NOAA’s temperature data looks like, an apples-to-apples comparison, back to 1895: 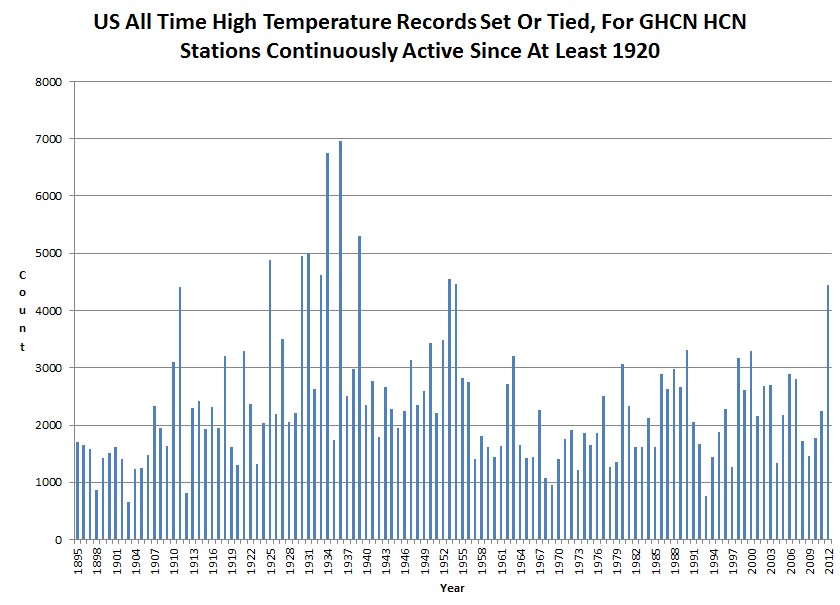 Historical Climatology Network (HCN) consists of 1218 stations in the 48 states.

NOAA’s Headline Focused on Lower 48 Only

Beyond the issue of comparing apples to oranges regarding station data, NOAA’s misleading headline about 2012 being the “warmest year” was also limited to data collected in just the Lower 48 states, the contiguous US.

NOAA excluded Alaska and Hawaii even though the full SOTC report does include temperature and weather details for all 50 states.

NOAA’s SOTC report did reveal, however, that in 2012, the state that covers 25% of the US land mass, the great state of Alaska: 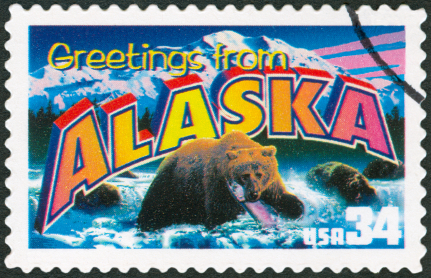 …was cooler and slightly wetter than average during 2012. The year began very cold for the state with a January temperature 14.0°F below the 1971-2000 average. Each subsequent season was also cooler than average, resulting in an annual temperature 2.3°F below average.

So here’s a suggested headline for the release of NOAA’s SOTC report: “2012 TEMPERATURES PLUMMET OVER 25% Of US!”

But, seriously, imagine how few articles would have been generated by the observation that “2012 DIDN’T CRACK TOP TEN WARMEST YEARS.”

This headline might have been more accurate but it would have been absolutely useless for driving the “catastrophic climate change” agenda.

Boring headlines fail to transfer billlions of your tax dollars to Agenda 21’s massive climate change programs at the UN or to defend the huge and duplicative agency budgets in what is now the Great Regulatory Republic of the US.

Sad but true – and chilling too.

Teresa Platt is the Director of the Environment and Enterprise Institute at the National Center for Public Policy Research.
Photos: iStockPhoto.com