ConservativeBlog.org
Posted at 16:18h in Articles, Blog by Amy Ridenour

The hyperbolic report “How Republicans Plan To Rig The Next Presidential Election, In Six Pictures” is cited by the Center for American Progress Action Fund as its top article for the week. That and other evidence makes clear the left is freaking out because some states are considering awarding presidential electoral votes by Congressional district rather than winner-take-all.

Despite Think Progress’ repeated claims that the idea, if implemented, would steal elections for the GOP, there’s no reason to assume congressional district electoral vote allocations benefit one party more than the other, particularly over time.

Furthermore, allocating votes by Congressional district is no less valid under the Constitution than winner-take-all.

I like the idea of awarding electoral votes by congressional district. Why shouldn’t the many liberals of Austin, Texas ever have their presidential votes count? Or the conservatives in San Diego? And why should all the presidential campaigns of both parties always focus on just a few states, while all-but-ignoring all the rest of us every time?

Make the campaigns truly national, I say, by forcing candidates to address the concerns of people in all 50 states, not just those of a few swing voters in Ohio, or Florida, or whichever few states seem the “swingingest” in any given year. Allocating electoral votes by congressional district could do that.

The Think Progress argument against change is that because the GOP controls more state legislatures right now, while the Democrat presidential candidate won more states in the last election, on paper, right now, the idea seems to favor the GOP.

But we aren’t having a presidential election right now, and by the time we do have one, everything will look different. The states’ demographics, the candidates, the parties’ popularity — everything.

Think Progress is especially upset that Virginia is considering allocating electoral votes by Congressional districts. Virginia has a Republican-dominated legislature, but (thanks to the high number of government employees in northern Virginia) it voted for Obama in 2012. Virginia Republicans see congressional district voting as a way to give a voice to more conservative voters outside Northern Virginia; Think Progress wants those Northern Virginia voters to keep driving the entire state’s electoral college votes into Democrat hands.

I live in Maryland’s Congressional District 2. It looks like this: 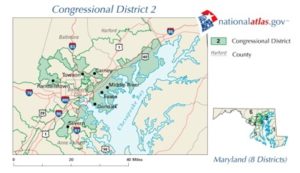 Until it left me last year, I lived in Maryland’s Congressional District 3. It now looks like this: 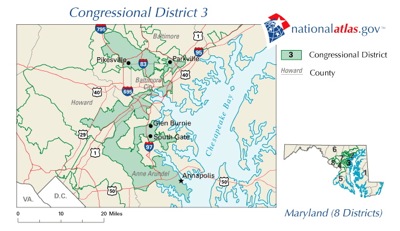 I am represented by a Democrat in Congress, yet the county I live in voted Romney over Obama.

But when I put “gerrymander” and “maryland” into Think Progress’ search engine, this is what I found: 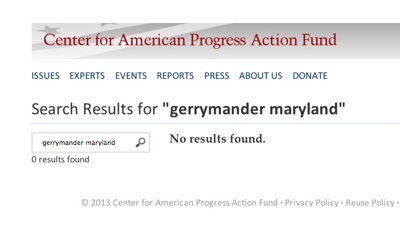 Think Progress isn’t indignant when the partisanship flows its way, and I daresay the GOP in Virginia can’t be expected to be, either.

The real question is whether congressional district-based electoral vote allocations could benefit the country. I believe Think Progress, by focusing exclusively on its own partisan goals, misses the point that it could be.

Both parties are partisan, and probably always will be, but voting by district, if widely adopted, wouldn’t be.