ConservativeBlog.org
Posted at 12:31h in Blog, Health by David Hogberg

One part of President Obama’s State of the Union speech actually provoked some deep thinking in me:

We should follow the example of a North Miami woman named Desiline Victor. When Desiline arrived at her polling place, she was told the wait to vote might be six hours. And as time ticked by, her concern was not with her tired body or aching feet, but whether folks like her would get to have their say. And hour after hour, a throng of people stayed in line in support of her, because Desiline is 102 years old. And they erupted in cheers when she finally put on a sticker that read “I Voted.”

1. After all the efforts taken to make voting easier such as absentee ballots and early voting, government still manages to create long lines for voting.  Amazingly, when lines start to form in private sector establishments, they implement a nifty little innovation called “open another checkout stand.”  Sources tell me they have had this innovation in the private sector for quite some time.  I wonder why the government hasn’t adopted it at polling stations? 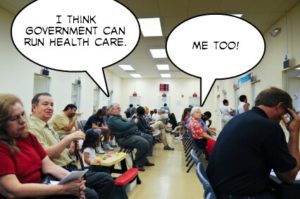 2. But perhaps that’s the wrong way to look at it.  Maybe we should look at it in a positive way such as: Government Excels At Creating Long Lines!  Bureaucracy has a talent for this.  Go down to your Department of Motor Vehicles any day of the week.  Or if you are an immigrant and want to migrate here legally, sign up with the U.S. Citizenship and Immigration Services.  Or if you live in Britain or Canada, let some of your joints degenerate and then try to get a hip or knee replacement.  Indeed, here in the U.S. we may be on the brink of finding out what that is like.

3. Given how well government is at making voting a convenient, time-saving endeavor, I have the utmost confidence that government can create manufacturing hubs, combat climate change, produce a clean energy market, drive new research with an Energy Security Trust, cut in half the energy wasted by our homes in the next 20 years, produce high-speed rail, help families refinance their homes, and fund and regulate pre-school.  In short, all of the things that Obama laid out in his SOTU.

Yes, the government’s ability to make voting efficient has shown us the way.  The future is very bright!  FORWARD!