13 Feb 2013 White Smoke And A Potential Pope: Cardinal From Down Under Questions Climate Consensus, by Teresa Platt

ConservativeBlog.org
Posted at 12:21h in Blog, Environment and Enterprise Institute, Global Warming by The National Center

White smoke will soon rise from the Vatican’s chimney (adding to the global inventory of greenhouse gases!), announcing that Roman Catholics have elected a new Pope – and it just might be the brave Cardinal from Down Under who questions the climate “consensus.” 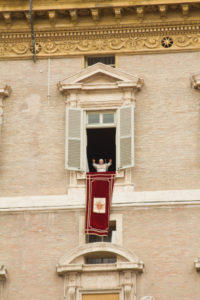 Cardinal George Pell, Archbishop of Sydney, is one of only 180 Roman Catholic Cardinals on the planet, 118 of whom are eligible to vote for a new Pope to replace Benedict XVI who is resigning for health reasons at the end of February.

The Cardinal from Down Under has taken the United Nations to task, warning it is the poor who suffer most from bad policy.  Fees and taxes taken from the masses, then transferred to the politically-anointed few, pay for multi-billion-dollar ethanol programs and landscapes littered with inefficient wind turbines and solar panels.  Further burdening the poor, such programs raise energy bills, and their costs are hidden in the price of everything we buy, including food.

He urged us to be prudent and cautious in our communal decision making:

As a bishop who regularly preaches to congregations of every age and at widely different levels of prosperity and education, I have some grasp of the challenges in presenting a point of view to the general public.  This helps me to understand the propaganda achievements of the climate extremists, at least until their attempted elimination of the Medieval Warming and then Climategate.

I was not surprised to learn that the [United Nations Intergovernmental Panel on Climate Change, UNIPCC] used some of the world’s best advertising agencies to generate maximum effect among the public.  Since the climate had been changing – as Professor Plimer puts it, ever since that first Thursday 4,567 million years ago when the Earth began and the atmosphere began to form – I am not a “denier” of climate change and I am not sure whether any such person still exists.  Therefore the term “climate change denier,” however expedient as an insult or propaganda weapon, with its deliberate overtones of comparison with Holocaust denial, is not a useful description of any significant participant in the discussion. Who would want to be denounced and caricatured as a “denier?”

…A final point to be noted in this struggle to convince public opinion is that the language used by [man-made global warming] proponents veers towards that of primitive religious controversy.  Believers are contrasted with deniers, doubters and skeptics, although I must confess no one has dubbed me a climate change heretic.

…Another more spectacular example of this successful spin is the debate on “carbon footprints,” on the advisability or not of a “carbon tax.”  We all know that it is the role of carbon dioxide in climate change which is in question, not the role of carbon, but we continue to talk about carbon.  The public discussion is almost entirely conducted in terms of “carbon footprints” and a “carbon tax”, provoking colorful but misconceived images of carcinogenic burnt toast and narrow, Dickensian chimneys being cleaned by unhealthy young chimney sweeps.  It is brilliant advertising.  But it is untrue.

I can understand why the UNIPCC public relations advisers did not ensure that these statistics were presented vividly to the public, because they are no stimulus to alarm!  In fact they seem to be a well-kept secret outside scientific circles.

…The history of climate change provides no reassurance that human activity can control or even substantially modify the global climate, although humans can effect important local changes for good or ill.  Apparently the present eccentricity of the earth’s orbit is small, decreasing and likely to continue for 30,000 years, meaning that our current interglacial may be exceptionally prolonged.  A pleasant coincidence.

… The propaganda wars, the economic self-interest of participants, the bluster and even intimidation, are peripheral to the painstaking work, sometimes contentious, among competent specialists, dedicated to the pursuit of truth, wrestling with an unruly and surprising complexity of factors, and often with one another. …Theologians do not have too much to contribute … except, perhaps, to note the ubiquity of the “religious gene” and point out regressions into pseudo-religion or rudimentary semi-religious enthusiasms.

…In essence, this is the moral dimension to this issue. … [W]e must be sure the solutions being proposed are valid, the benefits are real and the end result justifies the impositions on the community, particularly the most vulnerable.  You will gather that I have concerns on all three fronts.

…We might call this a cost-benefit analysis, where costs and benefits are defined financially and morally or humanely and their level of probability is carefully estimated.  Are there any long term benefits from the schemes to combat global warming, apart from extra tax revenues for governments and income for those devising and implementing the schemes?  Will the burdens be shared generally, or fall mainly on the shoulders of the battlers, the poor?  Another useful Latin maxim is “in dubio non agitur”: don’t act when in doubt.  There is no precautionary principle, only the criteria for assessing what actions are prudent.

When Galileo was placed under house arrest primarily because of his claim that the earth moved around the sun, he is said to have muttered “Eppur’ si muove”; and yet it moves.

As for Galileo so for us, the appeal must be to the evidence, not to any consensus, whatever the levels of confusion or self-interested coercion.

First of all we need adequate scientific explanations as a basis for our economic estimates.  We also need history, philosophy, even theology and many will use, perhaps create, mythologies.

But most importantly we need to distinguish which is which.

Well said, Cardinal Pell, and good luck with the election.

Millions will eagerly watch the Vatican’s chimney, looking for the white smoke announcing the new Pope!