ConservativeBlog.org
Posted at 06:18h in Articles, Blog by David Hogberg

What do you think the odds are that you’d find a member of Congress who is enthusiastic about the sequester?  If you said, “Slim and None, and Slim is walking out the door,” you’d be generous. 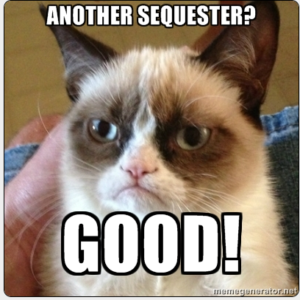 So why, as the title suggests, do I think we’ll probably see another in the not-too-distant future?  Two reasons: 1. Congress and the President are going to have to cut spending; and 2. Sequester is the worst way to do it except for all the others.

Since 1 isn’t that controversial, let’s discuss 2.

Most politicians—Democrat and Republican—hate spending cuts because it means that their chances of getting reelected decline.  The sequester, however, does less damage to those chances than any other method.

To see what I mean, let’s first consider what would happen if politicians cut spending via what might be called the “responsible way.”  Both sides would sit down, work out a package of spending cuts and then pass it.  The problem with doing that is neither side would have anyone to blame if voters got angry at them for the spending cuts.

A sequester helps politicians avoid that problem.  With a sequester, politicians pass a set of spending cuts that occur at some point in the future unless they can come up with some other agreement.  If they don’t reach that agreement, they can blame each other for the resulting cuts.

And that, sad to say, is the cynical genius of the sequester.  Both sides can say the other side is to blame.  Both sides can say they had a better plan to put in place of the sequester, but the other side just wouldn’t agree to it (something else they have been doing plenty of).  Voters will likely have a hard time sorting it out, which means they’ll have a hard time knowing which politicians to hold responsible.  Voters who can’t figure out who is at fault are less likely to blame their Representative or Senator—thus, a sequester is less politically damaging.

As long as politicians have to cut spending, they’ll reach for the method that enables them to take the least amount of responsibility.  Until someone comes up with a better method, sequester fits the bill.