13 Mar 2013 It Costs A Million To Answer The Million-Dollar Question: “Is This Fishery Sustainable?” by Teresa Platt

ConservativeBlog.org
Posted at 05:11h in Blog, Environment and Enterprise Institute by The National Center

The Maine lobster fishery predates the founding of the United States of America.  Its scientific management regime is run by the State of Maine and paid for by tax dollars.  Still, answering the million-dollar question, “Is this fishery sustainable?” cost a cool million dollars.

The Marine Stewardship Council (MSC)’s certification program took fully five years and almost $300,000 to complete the paperwork to label just this one lobster fishery “sustainable.”  The price to keep the label for the next five years?  Another half a million to a million. 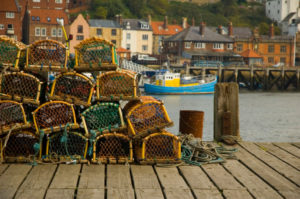 All this work was done to satisfy an uneasy public, worn down by years of “save the oceans” campaigns.  Unless lobsters carry the MSC label, Walmart won’t stock them.  Which begs the question: Lobster is so plentiful that even Walmart is stocking it in bulk?  Who’s next?  McDonald’s?

Beyond Walmart, other markets, especially in Europe, closed their doors to legally harvested lobster unless it had the MSC seal of approval.  To regain access, the lobstermen had to pay the MSC-certified certifiers.

If this expensive and time-consuming process does not result in an increase in market share for Maine lobster, it’s probably not worth it, explained Patrice McCarron, the executive director of the Maine Lobstermen’s Association.

While the number of Maine lobstermen holding licenses has remained steady at approximately 6,700 for more than half a century, 2012 landings hit a record-breaking 63,000 short tons, over 125 million pounds, with a wholesale value of almost $350 million. 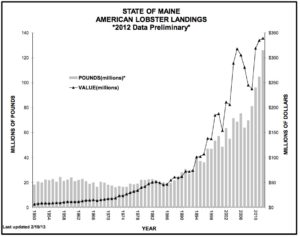 But what if landings, currently at record highs, decline and MSC revokes certification over concerns that the fishery is in trouble?  Lobsterman Jon Carter of Bar Harbor, a member of Maine’s Lobster Advisory Council, worries that such a blacklisting could leave the industry in worse shape than if it had never been certified.

The American lobster fishermen are afraid of this process.

Maine lobstermen have long maintained minimum and maximum catch sizes and generations of Maine lobstermen have cut small V-notch marks in the tails of the prolific egg-producing females, returning them to the sea to ensure a future supply of lobster.  The story of their forward-thinking conservation effort is beautifully told in Trevor Corson’s The Secret Life of Lobsters: How Fishermen and Scientists Are Unraveling the Mysteries of Our Favorite Crustacean.

Beyond stewardship, lobstermen currently benefit from water temperatures conducive to the survival of juvenile lobster.  And groundfish, believed to be major predators on juvenile lobster, have declined, a change cited as possibly responsible for the increase in lobster in the Gulf of Maine.

But as long as lows follow highs, lobster landings will decrease someday. When that happens, one can only hope that MSC doesn’t simply yank the label and close markets to hard working lobstermen.  They deserve better than that.