ConservativeBlog.org
Posted at 04:56h in Blog, Health by David Hogberg

It’s not clear if Wendell Potter was a man of the left before he jumped ship from an insurance company to become one of ObamaCare’s biggest apologists.  If not, he’s certainly absorbed many of the left’s mannerisms since then. 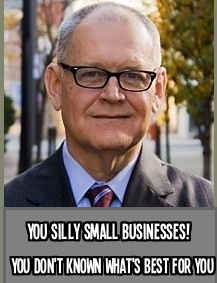 At issue is the growing practice of small businesses “self-insuring” to avoid some of the costlier mandates of ObamaCare.  As Competitive Enterprise Institute’s John Berlau puts it, self-insuring “offers both smaller firms and younger employees a chance to escape the costs of subsidizing everyone else’s insurance” on the ObamaCare exchanges.  Previously it was very difficult for small firms to self-insure because with such a small number of employees paying into the insurance pool, the insurance pool would be too small to cover the costs if one or two employees became gravely ill.  But now small employers can buy “stop-loss” policies which will cover the costs above a certain amount if one employees runs up big health care costs.

Potter is incensed because this could undermine the very purpose of ObamaCare, which is forcing the the young and healthy to subsidize the sick and the old.  Potter doesn’t describe it in those terms.  Rather, like a good lefty polemicist, he pulls a sleight of hand and writes that ObamaCare is supposed “to make coverage more affordable and available to all of us, not just the young and healthy”—implying that it is supposed to make it affordable to the young and healthy.  But Potter almost slips up when he further writes that it’s “essential that the exchanges attract younger healthier people who get sick less in order to keep coverage for others affordable.”  He’s careful, though, never to say that this arrangement will mean that the young and healthy will pay more, even though they will as a recent analysis in Contingencies demonstrated.

What’s happening here is that small businesses are trying to provide insurance to their employees by avoiding costly ObamaCare regulations.  Describing it that way, though, casts it in a positive light, so Potter trots out the lefty trope of the greedy Big Insurers vs. the people:

…insurers have turned once again to the Chamber [of Commerce], this time to wage a behind-the-scenes campaign aimed at state insurance commissioners. If they succeed, insurers will be able to sell a highly profitable insurance product to a highly targeted group of small employers — those with mostly young and healthy workers….

The key to this fight are those state insurance commissioners. Their organization, the National Association of Insurance Commissioners, just wrapped up its fall meeting in Washington, where consumer advocates were pitted against lobbyists for big insurers and their old friend, the Chamber of Commerce. The Chamber has taken the lead in pressuring the NAIC to make it easy for insurers to sell stop-loss coverage to small businesses wanting to avoid many of the ACA’s consumer protections. Those protections aren’t a small matter; they would, among other things, prohibit insurers from charging people higher premiums because of their gender, age and health status. Buying stop-loss coverage would also allow employers to largely side-step any regulation at the state level….

This would be an almost irresistible deal for small employers with mostly young, healthy male workers.

First notice that Potter refers to the prohibitions on age and health rating as “consumer protections” instead of what they really are, costly regulations.  Of course, by referring to them as consumer protections he obscures the fact that they will raise the cost of premiums, especially for the young and healthy.

Finally notice that he calls the deal “irresistible” for small employers.  Those big insurers are offering a very seductive product, and small business just can’t be trusted to do the right thing.  Potter never acknowledges that perhaps small business owners have given this considerable thought and decided it is the best way to keep their employees insured while at the same time keep their businesses running.  Of course not.  Like all good leftists, Potter wants the wise, anointed ones in government to make those decisions for small businesses:

Yes, naturally, we are all supposed to subjugate ourselves to the intent of Congress.  The wise, noble and omniscient 535 men and women who are our moral and intellectual betters.  That the roughly 300 million other people in the nation might have their own ideas about how to best procure health insurance and would look for ways around government regulations; and that Congress would neither have enough knowledge or foresight to envision how ObamaCare might turn out despite their intentions, well, there is a book about that type of thinking and it would be so nice if members of Congress actually read it.  Heck, it would be a big improvement if Potter actually thumbed its pages.

Alas, don’t count on it.  Potter and his ilk are too busy saving small businesses from themselves.